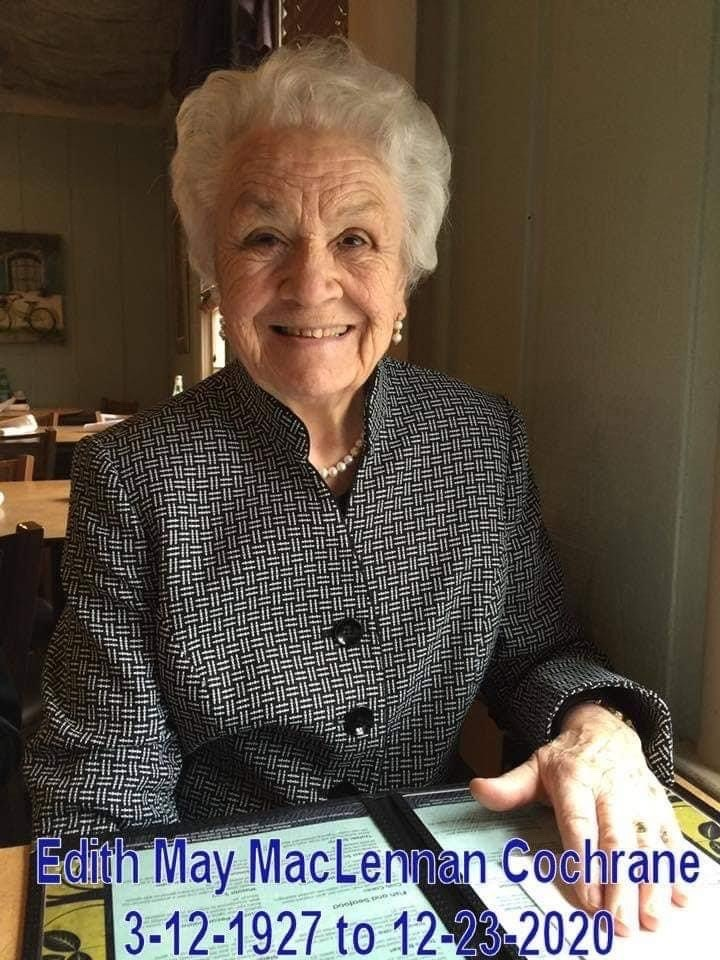 Obituary of Edith May Cochrane

Born March 12, 1927, in Hyde, England, she was the daughter of the late Alistair Hugh and Ann Elizabeth Booth MacLennan. On August 17, 1957 she married Philip John Cochrane Sr., who survives.

She was preceded in death by a son, Andrew Cochrane on April 12, 1963, and a brother and sister-in-law, John Hugh and Audrey MacLennan.

Edith attended Florence Nightingale Hospital for her student nurse training from 1943 to 1945. She received her registered nurse degree from Stockport Infirmary, Stockport, England in 1947. She obtained her midwifery degree and became a certified state midwife from St. Mary's at Leeds Hospital in Yorkshire, England in 1951. She obtained her Tropical Medicine and Infectious Disease Diploma from Institut De Medecine Tropicale Prince Leopold in Antwerp, Belgium in 1953. On August 27, 1953, Edith started working in the Congo, and she stayed there until 1956. She then attended Kenley Bible College from 1956 to 1957, before returning to the Congo to work from 1957-1976. She retired as an ordained minister.

After her retirement in 1999, Edith continued to volunteer with the church's prayer chain and was the prayer group leader for many years. She published her autobiography, "Who, Me Lord?" in 1995. In 2007 she became a US citizen. She had been an ordained Assemblies of God Minister with the Penn-Del District since 1966, and she was honored for 50 years of ordination by the Assemblies of God in 2016.

Edith enjoyed helping others with her medical skills and training, crocheting, knitting, sewing, gardening (especially flowers), baking, working in church, preaching, prayer group, and prophecy. She was generous to others always, even up to the end.

All services will be private at this time.

In lieu of flowers, memorial contributions may be made to State College Assembly of God World Missions at 2201 University Drive, State College PA 16801.

Share Your Memory of
Edith
Upload Your Memory View All Memories
Be the first to upload a memory!