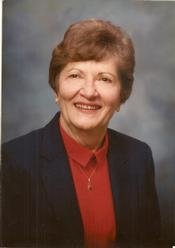 Virginia F. Althouse, 93, of State College, died Monday, November 28, 2011, at The Atrium at the Village at Penn State. Born November 3, 1918 in Reading, she was the daughter of the late Lloyd Herbert and Ida Boyer Feick. She married Paul M. Althouse on August 16, 1941 who preceded her in death on February 4, 1972. She is survived by two children, Richard Althouse, of Boalsburg and Nancy J. Sloss and her husband, Robert, of Tyrone. She is also survived by three grandchildren; Brent Sloss and his wife, Tiffany, Elizabeth Sloss, Eric Sloss and his wife, Jennifer and three great grandchildren; Brayden, Rowan and Carson. Virginia received a Bachelor's Degree from West Chester University in Teacher Education. She worked as an administrative assistant at the Eisenhower Chapel, Penn State University from 1975-1985. She was a member of the University Women's Club for sixty years. She also was a volunteer at the American Red Cross and Mount Nittany Medical Center. Funeral service will be at 11 a.m. on Saturday, December 3, 2011, at Koch Funeral Home, 2401 S. Atherton St., State College with the Rev. Thomazine W. Shanahan officiating. Burial will be in Centre County Memorial Park. Memorial Contributions may be made to PM Althouse Fund for Outstanding Teaching, College of Science, Penn State University at 101 Old Main, Penn State University, University Park, PA 16802. Arrangements are under the care of Koch Funeral Home, State College. Online condolences may be made at www.kochfuneralhome.com.
To send flowers to the family or plant a tree in memory of Virginia Althouse, please visit Tribute Store

A Memorial Tree was planted for Virginia
We are deeply sorry for your loss ~ the staff at Koch Funeral Home
Join in honoring their life - plant a memorial tree
Services for Virginia Althouse
There are no events scheduled. You can still show your support by sending flowers directly to the family, or planting a memorial tree in memory of Virginia Althouse.
Visit the Tribute Store
Print
Share A Memory
Send Flowers
Plant a Tree