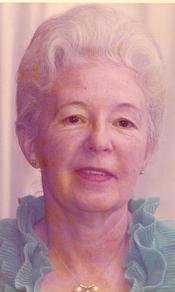 Madalene Vonada Haslop, 97, of State College died Thursday, December 8, 2011 at Hearthside Rehabilitation and Nursing Center. She was born December 16, 1913, in Aaronsburg, the daughter of the late D. Sparr Wert and Eva Fleicher Wert. Her childhood home now hosts the Penns Valley Area Historical Museum in Aaronsburg. In 1934, she married Phillip A. Vonada who died in 1972. In 1976 she married Robert D. Haslop who preceded her in death in 1999. From 1946 to 1963, she assisted her husband in the operation of their craft supply business in State College. Madalene was a life-long, avid craftsperson and an accomplished weaver. Starting in 1968, she participated in the Central Pennsylvania Festival of the Arts for fourteen years. She was a teacher in the Adult Education Program of the State College School District for more than thirty years. During the summer she was Arts and Crafts director for the State College Parks and Recreation Board and directed arts and crafts programs in various camps throughout Pennsylvania. She was a long-time member of the State College Women's Club and active in the Art and Drama departments, helping to organize annual craft shows as well as giving demonstrations in weaving to other Federated Women's Clubs. She was a member of Grace Lutheran Church in State College for more than fifty years and active in its Women of Grace organization. She also was an active Life Member of the Centre County Historical Society. She was preceded in death by her son, Douglas Vonada on August 4, 2005. She is survived by her daughter-in-law, Dee Vonada, two granddaughters, Sue Barger and her husband, Scott and Deanna Vonada and a great grandson, Evan Barger, all of State College. Visitation will be 10 to 11 a.m. on Monday, December 12, 2011, at Koch Funeral Home, 2401 S. Atherton St., State College. Funeral service will follow at 11:00 a.m. at the funeral home with the Rev. P. Stevens Lynn officiating. Burial will be in Salem Lutheran Cemetery in Aaronsburg. Memorial contributions may be made to Grace Lutheran Church, 205 S. Garner Street, State College, PA 16801 or the Penns Valley Area Historical Museum, 244 W. Aaron Square, Aaronsburg, PA 16820. Online condolences may be made at www.kochfuneralhome.com.
To send flowers to the family or plant a tree in memory of Madalene Haslop, please visit Tribute Store

A Memorial Tree was planted for Madalene
We are deeply sorry for your loss ~ the staff at Koch Funeral Home
Join in honoring their life - plant a memorial tree
Services for Madalene Haslop
There are no events scheduled. You can still show your support by sending flowers directly to the family, or planting a memorial tree in memory of Madalene Haslop.
Visit the Tribute Store
Print
Share A Memory
Send Flowers
Plant a Tree