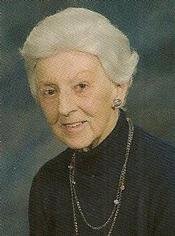 Mary Jean Rimbach, 84, passed away Saturday, December 9, 2011, in State College. Born January 3, 1927, in Tamaqua, she was a daughter of the late Willis R. and Ida Reber Parnell. On June 20, 1953, she married George H. Rimbach, who preceded her in death. She is also survived by two sisters, Elinor Burns, of State College and Kathleen Sherwood of Thorndale. She is also survived by four nephews, Kevin Burns of Carson City, Nevada, Robert Sherwood of Crozet,Virginia, Thomas Sherwood of Eagleville and Paul Sherwood of Phoenixville. Also surviving are three grand-nephews, Simon Burns, Giles Sherwood, and Aaron Sherwood. Mary Jean graduated from St. Jeromes High School in 1944. That same year she also graduated from Bruin School of Music in Pottsville where she studied piano. The following fall she attended the University of Pennsylvania, graduating with honors with a Bachelor of Music degree in 1948, having majored in piano. She was a member of the Chi Omega Sorority. In 1950, she graduated from the Hamilton School of Music beginning a career as a piano teacher. She taught privately for five years before marriage. She received a teacher's certificate in Piano Pedagogy. She was in the first group of teachers to form the State College Piano Teachers Association, having served as president for one year. She graduated in 1968 from Penn State with a Bachelors of Science Degree in Elementary Education. She was elected to Pi Lambda Theta Honorary Education Society. For 23 years, Jean taught in the elementary schools of State College; Matternville, Houserville, and Easterly Parkway. She was invited to join Delta Kappa Gamma Honorary. After retiring in 1991, she immediately joined the Docent Program at Palmer Museum. She served for 19 years focusing only on children's tours. She served as a co-president with her sister, Elinor, for two years. She audited many art history courses as part of her training. She was an avid golfer. She was a part of the group who organized the Blue Course Ladies Golf League. She served as president for one year. She enjoyed playing on many different golf courses. She was a member of Our Lady of Victory Catholic Church. She enjoyed playing piano, golf, reading symphony concerts, and Penn State Football for 50 seasons. Visitation will be from 6-8 p.m. on Monday, December 12, 2011, at Koch Funeral Home, 2401 S. Atherton St., State College. A funeral mass will be held at 10:30 a.m. at Our Lady of Victory Catholic Church with Father Matthew Baum officiating. Burial will be in Odd Fellows Cemetery in Tamaqua. Memorial contributions may be made to the American Cancer Society, Centre Unit, 123 South Sparks Street, State College, PA 16801 or to Docents, Palmer Museum of Art , Curtin Road, The Pennsylvania State University, University Park, PA 16802-2507 or Our Lady of Victory Catholic Church, , 820 Westerly Parkway, State College, PA 16801. Online condolences may be made at www.kochfuneralhome.com.
To send flowers to the family or plant a tree in memory of Mary Rimbach, please visit Tribute Store

A Memorial Tree was planted for Mary
We are deeply sorry for your loss ~ the staff at Koch Funeral Home
Join in honoring their life - plant a memorial tree
Services for Mary Rimbach
There are no events scheduled. You can still show your support by sending flowers directly to the family, or planting a memorial tree in memory of Mary Rimbach.
Visit the Tribute Store
Print
Share A Memory
Send Flowers
Plant a Tree