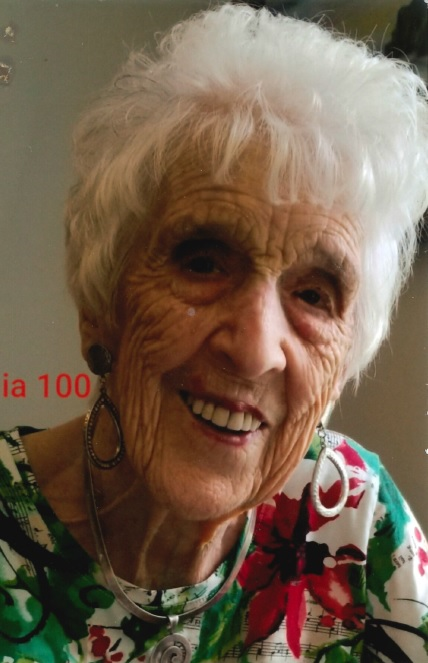 Virginia McCann Robertson of State College died quietly Saturday, May 8, 2021 of natural causes. At age 102, she was happy and satisfied that she had been a positive influence on her family.

Virginia was born in St Louis County, Missouri on Oct. 2, 1918; the daughter of the late Irving Goff and Fannie LeRoy Sands McCann. She was the third of four children. She enjoyed the friendships of her siblings all her life. Virginia was raised in Casper, Wyoming, moving to Washington DC where she finished high school.

On May 17, 1942, Virginia married Eliott B. Robertson in Las Vegas after a long courtship. Eliott saw action in the Pacific in World War II where he fought from Pearl Harbor through Okinawa, where he was twice wounded. He preceded her in death in 1997 and is buried at Arlington National Cemetery.

They had six children, four of whom survive: Martha Robertson Weidensaul and her husband Craig of Centre Hall, Sam Robertson and his wife Rita of Cincinatti, OH, Eliott Robertson and his wife Dianne of Silverthorne, CO and the Bahamas, and Mark Robertson and his wife Victoria of Nicaragua and West Virginia. She was preceded in death by one daughter, Maureen Robertson Baggett, whose husband Wayne survives in State College; one son, Harry P.T. Robertson; one brother, Irving G. McCann; and two sisters, Sally Larmore and Maureen Lamb. Virginia had 14 grandchildren and 10 great grandchildren. She adored each one. Nothing delighted her more than a family gathering when she was able to show off her family.

Virginia's family and friends will remember her positive attitude toward life and her unbending confidence. She was devoted to her family and enjoyed learning and meeting new people.

Virginia had great strength in her convictions. She never lost her love of the dramatic and livened many a gathering with her stories and cheers. She did not have a shy bone in her body, loved to sing and never refused an invitation to dance.

Virginia moved easily among quite different lifestyles. She experienced the Great Depression and the associated lean times. She worked as a clerk and a salesperson while living at the YWCA.

Virginia was a hands-on mom, raising six children while living on a remote southern Maryland tobacco farm when Robbie was deployed. He was stationed at Headquarters Marine Corps, Barstow, CA and Camp Lejeune, NC, where she fulfilled many unofficial duties.

Later she tried her hand at selling real estate and earned her license at age 62. She was highly successful, winning many awards for sales and created a legacy for her children and grandchildren.

Virginia loved to travel and relished taking her grandchildren on overseas trips. She and her sister, Maureen, traveled throughout Europe. After Robbie's death, she traveled alone to China, Australia, Europe and Africa.

Virginia was a lifelong Bridge player. When not playing Bridge, she was knitting sweaters while keeping up with current events. She began a tradition of knitting a large holiday stocking for all extended family.

Diesel, perhaps her favorite dog, rarely left her side and was well-known at The Village.

Virginia moved from Annapolis, MD to The Village at Penn State in 2006. She enjoyed her life there and made many friends among the other residents. She especially enjoyed working with her daughters at holiday time making wreaths at Tannenbaum Farms.

Virginia spent her last years at the Village in the Atrium where she was treated with loving care and respect.

It was Virginia's wish to have a Celebration of Life at the Village for the residents and staff.

Graveside services and interment will be held at Arlington National Cemetery in the future.

Arrangements are under the supervision of Koch Funeral Home, State College. Online condolences and signing of the guest book can be entered at www.kochfuneralhome.com or visit us on Facebook.

To send flowers to the family or plant a tree in memory of Virginia Robertson, please visit Tribute Store

Share Your Memory of
Virginia
Upload Your Memory View All Memories
Be the first to upload a memory!
Share A Memory
Send Flowers
Plant a Tree