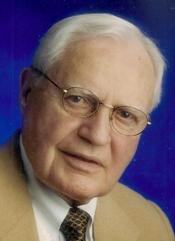 E. Stratford ("Strat") Smith died on Sunday, December 25, 2011 at Mount Nittany Medical Center. Mr. Smith enjoyed a long and illustrious career as an attorney, naval officer, cable TV pioneer, and as a professor in Penn State's College of Communications. He was dearly loved and deeply respected by family, friends, and colleagues. Mr. Smith was born on December 9, 1916 in Brigham City, Utah. He earned his J.D. from the George Washington University School of Law with honors in 1944 while serving as the Chief of the Tariff Section of the FCC. Prior to his law school graduation, Mr. Smith was inducted into the United States Navy where he served as Communications Officer to Admiral Chester W. Nimitz, Commander-in-Chief of the Pacific Fleet and Ocean Areas, through 1946. Upon his return to civilian life, Mr. Smith earned his Master's Degree in Law from George Washington University, and accepted a post as an attorney with the FCC's Common Carrier Division. Mr. Smith's initial accomplishments at the FCC include establishing the right and standards for the connection of non-telephone company equipment to telephone facilities, and mediating the resolution of a nationwide dispute among the then four leading television networks, ABC, CBS, NBC, and Dumont, in the allocation of intercity television channels. In the early 1950's, Mr. Smith learned of "community antenna systems" that were being deployed in rural areas. He travelled to Franklin, PA to better understand the nature of the system to determine whether the FCC had the authority to regulate the systems as common carriers. The FCC, preoccupied with the UCF and VHF channel allocations, elected not to further pursue the regulation of community antenna systems at that time. In 1951, Smith left the FCC and entered private practice in Washington, D.C. With his knowledge of the nascent cable television industry and foreseeing the legal and regulatory challenges that it would face in its growth and maturation, he became involved with the National Community Television Association (NCTA) in 1952. Within months and while continuing in private practice, Mr. Smith was appointed as the Executive Director of the NCTA, and became its first General Counsel, a position in which he served through the early 1960's. While at the NCTA, Mr. Smith was instrumental in the formation and expansion of state and regional associations crucial to the industry's growth and development, and coined and introduced the acronym "CATV" (community antenna television). In 1957, Mr. Smith cofounded the firm of Smith and Pepper. During this time, Smith engaged in the most complex and successful battle of his legal career. He, together with Robert C. Barnard, Esq., served as counsel to the cable industry in the matter of Fortnightly Corp. vs. United Artists Television. This test case was brought in federal court by United Artists claiming that certain CATV systems had infringed its copyrights by picking up, amplifying and delivering UA's broadcast signals to system subscribers. Although the U.S. District Court for the Southern District of New York and the Second Circuit Court of Appeals found for United Artists, on June 17, 1968, the United States Supreme Court rejected the lower courts' decisions by accepting in its entirety the "master antenna" theory authored and crafted by Smith. By this decision, the High Court determined that the CATV systems had not "performed" copyrighted works in public, an act prohibited by U.S. copyright law. Rather, the systems, while technically complex, merely served as an extension of each subscriber's antenna. Per an April 1988 article in Cablevision magazine, "Fortnightly stands as nothing less than a landmark decision. It paved the way for [cable] industry development and it preserved a climate for entrepreneurial adventure and opportunity." Smith's accomplishments on behalf of the cable industry were widely recognized. In 1968, following his victory in the Fortnightly case, he was named as the NCTA's "Man of the Year." In 1973, Smith was honored with the Larry Boggs Award in recognition of his outstanding contributions to the Cable Television Industry, and in 1999 was inducted into The National Cable Television Center's Hall of Fame together with R.E. "Ted" Turner, Gerald Levin, and John Malone, among others. After retiring from the practice of law, Mr. Smith was appointed as Professor of Cable Telecommunications Studies and Law in Penn State's College of Communications, a position that he held from 1988 until his retirement in July 2001. In this role, Mr. Smith occupied the Cable TV Pioneer Chair. Mr. Smith is survived by his wife, Bette B. Jackson of State College, his brother, Dee W. Smith of Ogden, Utah, two daughters, Sharon J. Black of Provo Utah and Diane R. Smith of Arlington, Virginia, and by three grandchildren, Elisa, David, and Sarah. He was predeceased by his brother, Byrne. Visitors will be received from 1:00 to 3:00 p.m. on Thursday, 12/29/2011 at the Koch Funeral Home in State College, with a memorial service at 3:00 p.m. Donations in Mr. Smith's honor and memory may be made to: the Resurrection Orthodox Presbyterian Church, P.O. Box 5173, Bellefonte, PA 16823; Centre Life Link EMS, P.O. Box 272, State College, PA 16804; Mount Nittany Medical Center, 1800 E. Park Avenue, State College, PA 16803; or the College of Communications at PSU, 100 Old Main, University Park, PA 16802.
To send flowers to the family or plant a tree in memory of E. Smith, please visit Tribute Store

A Memorial Tree was planted for E.
We are deeply sorry for your loss ~ the staff at Koch Funeral Home
Join in honoring their life - plant a memorial tree
Services for E. Smith
There are no events scheduled. You can still show your support by sending flowers directly to the family, or planting a memorial tree in memory of E. Smith.
Visit the Tribute Store
Print
Share A Memory
Send Flowers
Plant a Tree