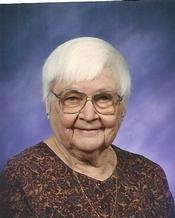 Barbara McDowell Passow of State College died Saturday, December 10, 2011 at The Atrium at the Village at Penn State. She was 87. Born July 10, 1924 in Corry, PA, she was the daughter of Elinor M. Cook McDowell of Bellefonte, and her husband Robert. She was married to Robert Lawrence Passow, originally of Chicago, who survives. She is also survived by two children, Janet Passow Engeman and her husband, Matthew Thompson, of State College; Robert L. Passow, Jr. and his partner, B. Patrick Cox, of Alexandria, VA; and two two grandsons: Nick Gillock and his wife, Yi-Hsiu Yeh and their son, Julian Gillock Yeh Rife, of Los Angeles; and Douglas Gillock and his wife, Queen Esther Pooser, of New York City. Barbara was employed by Bell of Pennsylvania, and later retired after working for ten years in the Telecommunication Department at Penn State University. Music and the church played a major role in Barbara's life. She was a member of St. Andrew's Episcopal Church, where she served on the Altar Guild and was an active member of the Committee to Combat Prejudice. Barbara was involved in both vocal and instrumental music throughout her life, and enjoyed singing in St. Andrew's choir for over 50 years. She was a member of the Linn Singers and the choirs of the Presbyterian Church and St. John's Episcopal Church in Bellefonte. In State College, she sang with Pro Nobis (a small vocal ensemble), the State College Choral Society, and The Opera Society of Central Pennsylvania. Barbara was especially proud of being a charter member of the Nittany Valley Symphony, in which she played the violin for many years. Barbara also enjoyed painting and sewing, and sold several oil paintings at the first Central Pennsylvania Festival of the Arts in 1967. Barbara and her husband Bob loved to sail. They raced with the Lake Glendale Sailing Club at Prince Gallitzin State Park for many years, later serving on the race committee. After retiring from racing, Barbara and Bob enjoyed cruising on the Chesapeake Bay, spending vacations on the Eastern Shore of Maryland, and visiting their friend Michael Jinbo (director of the Nittany Valley Symphony) in Maine at the Pierre Monteux School for Conductors & Orchestral Musicians. A memorial service will be at a later date at the convenience of the family, and inurnment will be in the St. Andrew's Episcopal Church Columbarium. Memorial contributions may be made to St. Andrew's Music Fund at 208 W. Foster Ave., State College, PA 16801 and to the Nittany Valley Symphony, P.O. Box 1375, State College, PA 16804. Arrangements are under the care of Koch Funeral Home, State College. Online condolences may be made at www.kochfuneralhome.com.
To send flowers to the family or plant a tree in memory of Barbara Passow, please visit Tribute Store

A Memorial Tree was planted for Barbara
We are deeply sorry for your loss ~ the staff at Koch Funeral Home
Join in honoring their life - plant a memorial tree
Services for Barbara Passow
There are no events scheduled. You can still show your support by sending flowers directly to the family, or planting a memorial tree in memory of Barbara Passow.
Visit the Tribute Store
Print
Share A Memory
Send Flowers
Plant a Tree