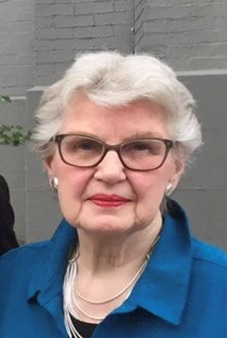 Jean Conway Stump, 87, died peacefully at The Atrium of State College on January 29, 2022. Jean was born on May 9, 1934 in Cambridge, Massachusetts. She was the only child of Walter Smith Conway and Marguerite Milner Conway.

Jean was preceded in death by her loving husband of 63 years, the late Reverend Derald William Stump, who passed away on October 8, 2020. She is survived by her three children and five grandchildren: Son, Christopher and his wife Brianne Brophy and their son, Collin, of St. George, Maine; daughter, Robin and her husband, B.K. Bastress, of Spring Mills, Pennsylvania and their children, Madison Bastress and Samantha Bastress; and son, Bill and his wife Dori Rebich Stump of Allentown, Pennsylvania and their children Kelley Jones and husband, Reg Jones and Kevin Stump.

Jean attended grade school in Somerville, Massachusetts and in Narragansett, Rhode Island. Her father worked for the U.S. Navy in Narragansett until World War II began. At that time, she and her parents moved to Ogden, Utah, where her father helped develop the Clearfield Naval Supply Depot. Jean graduated from Wasatch Academy in Mount Pleasant, Utah.

She earned a bachelor's degree in philosophy from Boston University. She met her future husband in Cambridge, Massachusetts while he was a seminarian at Harvard Divinity School. They married on June 5, 1957. She and her family lived in Massachusetts, Iowa, Tennessee and then settled to stay in State College, Pennsylvania in 1965.

When all of her children were in elementary school, Jean began to work at Pattee Library on Penn State campus in the non-book cataloging department for films, art and music recordings. She retired after working there for 23 years.

An avid reader, Jean was incredibly bright, creative and curious. She loved learning new things. Her many talents included sewing, quilting, cooking, baking, gardening, nurturing house plants and doing crossword puzzles in pen. She had a beautiful singing voice, loved animals (especially her cats and granddogs) and trips to New England. Her greatest joy was her family. She was known for how much she adored her daughters-in-law and son-in-law. Jean and her husband often traveled to watch their children and then their grandchildren play youth, high school and college sports. They also loved attending their band concerts, choral concerts and musicals.

Jean's family would like to share their immense gratitude to all of the staff of The Atrium for their loving care. A family service for Jean will be held at St. Andrew's Episcopal Church at a future date. Donations in her memory may be made to The Stump Family Music Fund through Centre Foundation, 1377 Ridge Master Dr, State College, PA 16803 or to St. Andrew's Episcopal Church, 208 W Foster Ave, State College, PA 16801.

To send flowers to the family or plant a tree in memory of Jean Stump, please visit Tribute Store

A Memorial Tree was planted for Jean
We are deeply sorry for your loss ~ the staff at Koch Funeral Home
Join in honoring their life - plant a memorial tree
Services for Jean Stump
There are no events scheduled. You can still show your support by sending flowers directly to the family, or planting a memorial tree in memory of Jean Stump.
Visit the Tribute Store

Share Your Memory of
Jean
Upload Your Memory View All Memories
Be the first to upload a memory!
Share A Memory
Send Flowers
Plant a Tree