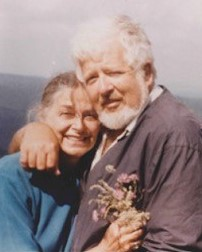 He is survived by his five children, ten grandchildren, three great-grandchildren, and a treasury of old jokes, which he told often (and often in public) with tender care and professional aplomb.

He was a veteran of WWII, having served in the US Army as an intelligence specialist.

A local newspaper described his career as "protean." He was first and foremost a media writer, turning out a long string of films, slide shows, TV programs, radio productions, and more.

In his later years he turned to print, serving as Science Information Officer for Penn State. Notably, he was the first to report on the development of the electron microscope.

He started his career writing classroom films for Encyclopaedia Britannica Films, mostly on subjects in the humanities: history, biography, science, the arts, and sometimes sports. A script of his on the American Revolution became a prize-winning film; it lasted for years. Some of his grandchildren reported seeing it in school.

Stimulated by the country's first Earth Day—in April 1970—Gil created a series of radio spots that he called Only One Earth. The style was humorous; the message: save the environment. The series ran for ten years on mostly commercial stations and generated a stream of mail from people interested in environmental improvement. The title, Only One Earth, he said recently, is as apt as ever, despite the discovery that the known universe is as awash in planets as it is in stars.

At Penn State he wrote and produced, among other things, a TV series for children, Key to the Cupboard, which featured a puppet who spoke only in verse. It is said to have anticipated Sesame Street by a decade.

Gil was active in local theatre, playing more than thirty roles for the State College Community Theatre and various university companies. He was in the very first show put on at the Boal Barn Playhouse, Tovarich, playing the Commissar. Other roles include Tevye, in Fiddler on the Roof, Big Daddy in Cat on a Hot Tin Roof, Grandpa in You Can't Take It with You, and Warwick in The Lark.

He was a respected raconteur and creator of the Jewish Joke Fest, an entertainment that ran intermittently for forty years.

He was a founding member of Congregation Brit Shalom of State College, and a long-term member of the National Association of Science Writers.

He was preceded in death by his wife of nearly 73 years, Blossom Zelda Aberg, parents Rose and Samuel Aberg, and sister Sylvia Block.

He is survived by a brother, Robert (wife Shirley), of Chicago as well as five children, ten grandchildren, and three great-grandchildren.

Funeral services will be held at Congregation Brit Shalom on Sunday, February 6, 2022 at 1:30 PM. No reception to follow due to COVID; masks mandatory. A memorial service to celebrate Gil's life will be announced in the near future.

Donations in honor of Gil Aberg may be made to Congregation Brit Shalom and the Schlow Library, both of State of College.

To send flowers to the family or plant a tree in memory of Gil Aberg, please visit Tribute Store
Sunday
6
February

Share Your Memory of
Gil
Upload Your Memory View All Memories
Be the first to upload a memory!
Share A Memory
Send Flowers
Plant a Tree