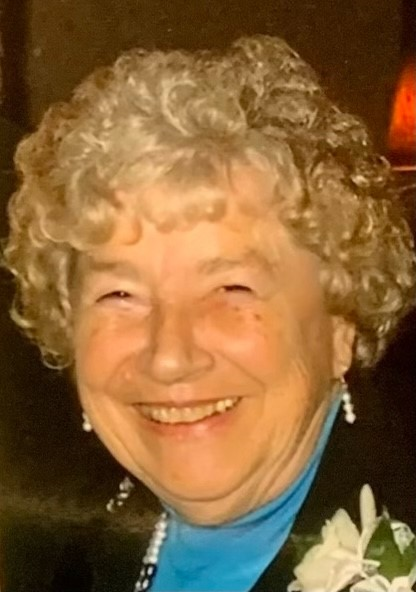 Ruth Dorsey Park, born September 28, 1932, of State College, died at age 89 on April 17, 2022, due to complications of heart, lungs, and well just about everything.  During her many surgeries and hospital stays she felt enveloped in love and prayers from this community.

There are some people that just know how to live a full life and Ruth Park was one of them.  To put an exclamation mark on the end of her life, she chose Easter, which is amazing in a few ways beyond the obvious.  Her father also died on Easter, 37 years prior and a grandson was born on the same date 40 years ago.

Ruth was born in Louisville KY, while her father was doing graduate work.  Parents, Warner and Miriam Dorsey moved to “The Hunker PA Farm” where Ruth was foreman to her four younger siblings, Lucille Utley, Gerald Dorsey and wife Laraine, and  sister-in-law Cretie survive.  Warren and Albert pre deceased their sister.  During those farm days, Ruth learned to work hard and play hard, traits that she passed along.

During Ruth’s Junior year at Penn State, she met her singing engineer.  Bill and Ruth married just prior to Ruth’s graduation in Home Economics, making 1954 a busy year.  Three (wait, twins!) four children later, Bill and Ruth settled into their Kemmerer Road home.   There were a few moves to Ithaca NY (Bill’s Doctorate) and Dearborn MI (Bill’s sabbatical); but, they always returned to State College.

Ruth and Bill were quite the Team.  In the small things Ruth would make an arrangement of flowers or shells and Dad would take the photograph and get cards printed for use.  In the large issues Dad would start a house addition and Mother jumped in, hammer in hand.   For many years, the Team, in their spare time ran Centre Marine and maintained several rental properties.

During her 20’s Ruth was a substitute teacher in PA and NY.   (how else could they afford groceries!)

Sewing and quilting provided hours of enjoyment year after year.  Quilts were big and small.  Family cherish the holiday table placemats and decorative wall hangings that she created.

During her sailing years, Ruth often crewed for Bill.  For Ruth being on the water was secondary to friendships new and renewed along the water’s edge.  At the Lake Glendale Sailing Club, Ruth was the first female Commodore during ‘92-’93.

Financial investing was important to Ruth.  She wanted other people to learn the importance of using the stock market to create long-term financial independence.  With Barbara Kabel (deceased), Ruth started a women’s investment club, “Lysistrata”.  The success of the club led the local chapter of the American Association of University Women to ask them to create a workshop on Investing for Women.  The interest was so great that instead of a workshop, they created five new women’s investment clubs.  Other clubs started by Ruth included PikPark for her children and grandchildren and a Couples Club.  However, the most satisfaction she had was joining the 29ers Stock Club.  This is an all-male club that she was invited to join in 2017 and “the guys” asked her to be their president in 2019.   She enjoyed the group and looked forward to their monthly meetings.

In 1988, Ruth joined the Pennsylvania Forest Stewardship program and quickly became a cheerleader for healthy forests.  She was on the PA Forest Stewardship Steering Committee for the past few decades.   Due to her artistic and inclusive mindset, the “Walk in Penn’s Woods” was created.  This is an event that encourages all Pennsylvanians to take a walk or hike through the woods and appreciate the variety of trees and learn about the benefit they provide to clean drinking water, lower water temperatures in streams, as well as the importance of lumber and other forest crops.

When Ruth wasn’t busy reading or attending functions, you could find her on a sunny day sitting on her porch.  Neighbors were always stopping by and feeling Ruth’s love.

Lessons from Ruth: 1.  Show up especially to family events.  2.  There are only 12 weekends to the summer, make the most of them.  3.  A kitchen needs two ways to get in and out because you never want to be trapped in there.  One life-long skill that she hated was cooking.  As instructed by Ruth ... “don’t say I liked to cook.  I hated cooking.”  (Don’t we know it.)  But, she loved a good party and hosted many!  4.  When you throw a party make sure people feel welcome.  Greet everyone at the door with a smile.  5.  Learn to balance your checkbook.  This was only directed at her daughters.  It was code for ‘hold off marriage until you landed a good job’.  6.  Have Determination to win an argument.  7.  Set the date!  Everything else will come together and fall into place.  8.  We could always ask WHY … but often the reply was “because!”.  9.  Just a fun aside: Ruth’s cardiologist said this to one of her daughters a few years ago “I’m assuming Ruth’s husband was the nice one!”  Ruth would admit to being a bit ornery.  10.  Be light hearted.  She had the ability to tell a good story or joke.  For all you educated and smart people here’s one of our favorites: What is the difference between illegal and unlawful? …. pause … Well one is a sick eagle and the other lands you in jail.

No surprise to her family, Ruth survived many health issues over many years.  She taught us the importance of not giving up.

To celebrate Ruth’s life the family invites you to a Memorial Service and Reception at St. Paul’s United Methodist Church May 14th at 11am.  St. Paul’s UMC, 250 E. College Ave., State College, PA, 16801.

Or plant a tree.

»(Do not delete this line. It does not print.  Text that is to appear on web must be entered before this line)

(Do not delete this line. It does not print.  Text that is to appear on web must be entered after this line)«

To plant a beautiful memorial tree in memory of Ruth Park, please visit our Tree Store
Saturday
14
May

Share Your Memory of
Ruth
Upload Your Memory View All Memories
Be the first to upload a memory!
Share A Memory
Plant a Tree