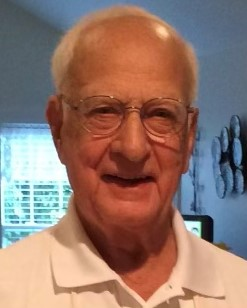 Get Directions
Friday
13
May

Obituary of Daniel A. Venturato

Daniel A. Venturato, 97, passed away peacefully on Sunday evening, May 1, 2022 at Centre Care in Bellefonte. Daniel was born on February 13, 1925 in Altoona; the son of the late Joseph G. Venturato and Teresa M. Varlotta.

Daniel was the last of his generation and was preceded in death by his siblings, Rose Bongornio (Jim), Lucy Sprouse (Sam), Helen Pescatore (Charles), Angela Cataldo (Armond), Geraldino, and Carl R. Venturato (Edith).

Daniel was called into the service, Navy, during WW2 in April of 1943. He graduated early after completing all his required training, and served aboard the USS Okaloosa, APA 219 (an attack transport). He, among many, participated in the Okinawa Campaign; transported Marines and Army troops to many Pacific Islands, the Philippines, China, and French Indochina. Daniel's ship also transported the first occupation troops to land in Japan and Korea. He received many awards and medals, including a Bronze Star and the Asian-Pacific Victory Medal. Daniel was recalled to the Navy during the Korean War and served aboard the USS Rehoboth AGS 50.

Daniel attended Zeth College in the late 1940's, and then enrolled at Penn State, first graduating in 1955 with a bachelor's degree, and then returning in 1957 and 1958 for his graduate studies. During his undergraduate days, Daniel was initiated into Delta Sigma Pi Fraternity. He was a member of the State College American Legion, State College Elks, and charter member of the Management Accountants Association. Daniel was one of the founders of LOCUS Inc. (a High-Tech company that was sold to Kaman Aerospace) and retired from there on August 1, 1988 as Vice President of Finance. Daniel was also employed at HRB Singer for 11 years as the Controller.

One of the true joys and pleasures of his life was playing the clarinet with the Little German Band of State College for nearly 50 years. They entertained many groups in the Centre Region, including the President of the United States.

In lieu of flowers please make donations to either: the Ruby S. Venturato Scholarship Fund at the Pennsylvania State University; OLV at 820 Westerly Parkway, State College, PA 16801 or to the local YMCA at https://www.ymcaofcentrecounty.org/support/donate/.

Share Your Memory of
Daniel
Upload Your Memory View All Memories
Be the first to upload a memory!
Share A Memory