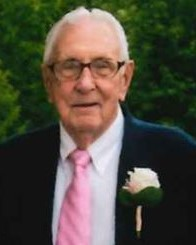 He is survived by six children, Darlene Kenney of Lemont, Kathie Mahaney and her husband John of Webster, NY, Barb Fry and her husband Tom of Boalsburg, David Kenney and his wife Cathie of Bala Cynwyd, PA, Sue Fox and her husband Fred of Bellefonte, and Mary Lou Carothers and her husband Paul of Warriors Mark; one sister, Barbara Powers and her partner Guy Murgo of Seabrook, NH; nine grandchildren: Pat, Laura, Jen, Mike, Kelly, Matt, Nick, Alex, and Brian; and four great-grandchildren: Sienna, Amelia, Jenson, and Layla. He was preceded in death by his sister, Bernice Fleming.

Jim graduated from Lowell High School, MA, in 1939. He volunteered to serve in the United States Navy during World War II. He earned his bachelor's degree in finance from Penn State University in 1947. He had careers in real estate, insurance, accounting, and sales.

Jim was a member of Our Lady of Victory Catholic Church, the Knights of Columbus, the Elks, the State College Legion, and the VFW.

Jim was part of the greatest generation, serving in the U.S. Navy in WWII; honorably discharged in 1946 with the WWII Victory Medal, American Area Campaign Ribbon, Good Conduct Ribbon, and the Asiatic Pacific Ribbon.

In 2019 he was one of a small group of veterans at an event that showcased their sacrifice. The vets that were young men when they served in WWII were exactly as you would expect; proud, grateful, and humble.

In his life of just over 101 years Jim was blessed with a large family. An opportunity to be with them on any occasion was something he very much enjoyed.

Always an avid sports fan, he loved watching the Pirates and Steelers, but as a loyal PSU Grad it was Penn State Football and Wrestling that he was truly passionate about. He had a love for the game of golf, which he enjoyed for over seventy years.

Memorial service will be at Our Lady of Victory Catholic Church on June 2, at 11:00 AM.

To send flowers to the family or plant a tree in memory of James Kenney, please visit Tribute Store
Thursday
2
June

Share Your Memory of
James
Upload Your Memory View All Memories
Be the first to upload a memory!
Share A Memory
Send Flowers
Plant a Tree