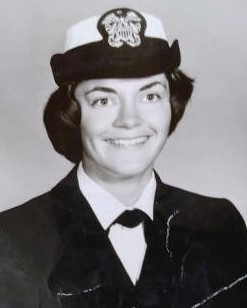 Mary Kathryn (Kathy) Rubano passed away on August 12 from complication of Alzheimer's.

She was born on March 17, 1942 in the city of Lansing, Michigan to Martin and Louise (Mantikoski) Barrett. Her twin sister Patricia was born several minutes earlier. For twelve years the two of them walked to St. Mary's Catholic Cathedral for academic and religious instruction along with many childhood friends that remained friends for life. Kathy graduated from St. Mary's high school in 1960 as their valedictorian. She won a scholarship to the College of Mount Saint Joseph in Cincinnati, Ohio, a Catholic all girls school, and graduated cum laude with a B.S. in nursing. In 1964 she joined the United States Navy Nurse Corps as a LTJG and served at the Balboa Naval Hospital in San Diego, California where she met her future husband Louis Rubano. They were married on December 18, 1965 and shared 56 wonderful years. In 1970 Kathy and Lou moved to State College where they raised four children. Later on she worked as a private duty and OB-GYN nurse. Despite her illness, she never lost the sweet temperament which her family loved.

Because of their Irish heritage and the fact that the twins were born on March 17, St. Patrick's Day, their birthdays were always a cause for celebration. As they grew older their birthdays were celebrated in Florida along with family and friends. With the advent of cell phones the sisters talked for hours about their families. She was an avid picture taker amassing many scrapbooks from which she gave each child and grandchild their own history in pictures not to mention a refrigerator covered with the family history. Kathy's greatest joy and fondest memories were time spent with her four children, three grandchildren and the birthday reunions. She loved the beauty of nature, gardening and trips to Rehoboth Beach with her young family and later to Siesta Key beach in Sarasota, Florida. She loved to gather shells on the beach, many of which came to rest in every nook and cranny of her home. One of her fondest memories was visiting Ireland with her twin sister and childhood classmates and seeing her maiden name, Barrett, on a store front.

She was predeceased by her parents and brothers, Larry and Jim (J.B). She is survived by her husband Lou of 56 years, her children Stephen Rubano (Huntingdon), Theresa Lafferty-Steen (Erie, Scott), Christine Warner (Manassas, Va.) and Michael Rubano (Petersburg, Melissa). She is also survived by three grandchildren, Shaun, Megan and Jenna and her twin sister, Pat Grimm (Littleton, Co.). She was well loved and will be missed.

To send flowers to the family or plant a tree in memory of Mary Rubano, please visit Tribute Store
Saturday
3
September