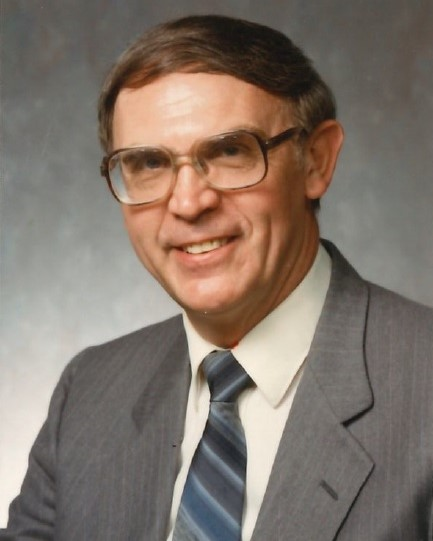 On August 21, 2022, Edward Russell Miller of State College was called to be with the Lord. He was the son of Edward Roy and Sarah Marjory Miller and was born in Bellefonte on April 22, 1934. He was a 1952 graduate of State College High School where he lettered in 3 sports and served as President of the Student Body. In 1956, he earned a BS degree in Civil Engineering at Penn State while serving as editorial manager of the Penn State Collegian, a member of Blue Key Service Fraternity and Beta Theta Pi Social fraternity. He also served as a wrestling team manager for 2 years under coach Charlie Spiedel.

In 1956, he began employment with a local contracting firm and married Cheryl Davis, his high school sweetheart. Shortly after his marriage he was inducted into the U.S. Army for a 6 year military career in the USA Corps of Engineers, which included 2 years of active duty. In 1958, he re-entered Penn State as a graduate assistant involved in studies of the Shavers Creek Watershed and earned 13 graduate credits before being appointed as a resident engineer by the Penn State physical plant, where he worked on construction of the Pollock Circle and Turf Pilot Dorms, the original skating rink roof and other projects. Ed obtained a Professional Land Surveyors license in 1958 and earned a Professional Engineers license in 1961. For 30 years he maintained a part-time surveying and engineering practice while designing and performing field layout of streets and lots of 17 local land subdivisions, including SpringLea Acres, Corl Acres, Smithfield, Harmony, Willevey Acres, Walnut Grove Estates and several sections of Vallamont, Park Hills, and others.

In May 1960, Ed began a 34 year career with the Pennsylvania Fish Commission as Assistant Chief Engineer and later rose to Chief Engineer, Assistant Executive Director, and for 7 years as Executive Director. He was directly responsible for creation of 30 fishing and boating lakes, including Colyer Lake, 200 fishing-boating access areas, and reconstruction and creation of additional Fish Propagation facilities throughout the Commonwealth.

Ed was responsible for acquisition of seven of the largest springs in the state, including Big Spring and Boiling Springs, many valuable trout streams, including 4 miles of Spring Creek in Centre County. He was involved in successful efforts to establish fishways on the Susquehanna, Schuykill and Lehigh Rivers and creation of the Trout-Salmon stamp to aid efforts to support the cold water fishery. He also established a statewide fisheries management program, an aquatic resource education organization, a boating safety education program and led efforts to change the agency title to "Pennsylvania Fish and Boating Commission" to properly identify the boating programs within the Agency.

During his Commission career, Ed served as President of the Northeast Conservation Engineers and Fish and ~ Wildlife Directors, Chairman of the Pennsylvania Wildlife Conservation Board and served as a member of the Mid Atlantic Fisheries Management Council and the State Environmental Quality Boards.

In 1986, Ed and Cheryl established the Nittany Antique Emporium on East College Avenue which was the first antique co-op in Centre County, and operated it successfully until their retirement in 1997.

Ed was a 75 year member of St. Paul's Methodist Church, a lifetime member of the Penn State Alumni Club and BPOE 1600, the Nittany Lion Club from its inception, and the Train Collectors Association for over 40 years.

In lieu of flowers, the Miller family requests donations be made in Ed's honor to charities of their choice. The family also thanks all who offered support and assistance during this difficult time.

A Celebration of Life will be held at St. Paul's Methodist Church on Friday September 16th from 3-4 pm, followed by fellowship and a light dinner. The burial will be held at Centre County Memorial Park.

Share Your Memory of
Edward
Upload Your Memory View All Memories
Be the first to upload a memory!
Share A Memory