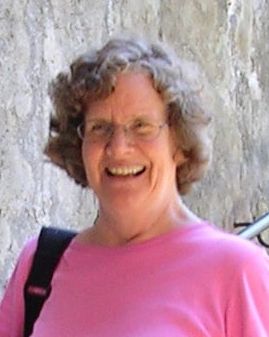 Margaret Sandelin Benson (82) died August 24, 2022, at Juniper Village in State College, Pennsylvania after a struggle with cancer, which she bore with grace and humility. Her husband, Thomas Walter Benson, was by her side.

Margaret graduated in 1958 from the High School of Performing Arts in New York as a drama major. In 1958 she won a New York State Regents full tuition scholarship to the school of Industrial and Labor Relations of Cornell University, in Ithaca, New York, where she was active in the dramatic society, with parts in many of the productions and backstage for others. For a summer job in 1960, she was recruited as a model by the Eileen Ford agency in New York; her photograph appeared in Mademoiselle, Life, and several other magazines. Margaret graduated from Cornell University in 1962 and embarked on a master's degree in Human Development at Cornell, which she completed in 1966.

At Cornell she met her future husband. Margaret and Tom were married on September 3, 1960, in Brooklyn, NY. They were the loves of each other's lives, best friends, and constant companions. They had two children--Margaret (Daisy) Benson and Sarah Benson. Margaret was a wonderful mother and grandmother and encouraged her daughters and granddaughter to be independent, strong women.

Her love of dance and theater lasted throughout Margaret's life. In State College she danced at the Jane Shepherd Dance Studio and performed in productions at the Boal Barn, including I Remember Mama. During the pandemic she joined in long-distance family readings of Shakespeare, Wilde, Shaw, and more. On car trips to visit grandparents in Connecticut and Long Island, she read classic children's literature to the family, and years later she read books at a distance to her beloved granddaughter.

Margaret was a passionate advocate for young children and for early childhood education. When her own children were young, Margaret worked with Head Start in Buffalo, NY, and when the family moved to State College in 1971, she worked as a home daycare coordinator and educator and worked again with Head Start in the Centre Region.

Margaret was a lifelong learner and was always ready for a new challenge. In the 1980s she entered the PhD program in Human Development and Family Studies at Penn State. Her dissertation research examined children's pretend play and storytelling. She finished her degree in 1990 and accepted a position teaching Human Development and Family Studies at Penn State Altoona, where she also served her colleagues as program coordinator. Margaret was an advocate for daycare and early childhood education, nationally, internationally, and at Penn State. She was a member of the Society for Research in Child Development and the National Association for the Education of Young Children. She published research in academic journals and won service and teaching awards from Penn State Altoona. She retired in 2014. Margaret loved teaching and wanted to prepare her students to be good citizens of the world. To this end she established and led a summer study abroad program for Penn State students in Human Development and Family Studies in Rome, and later Florence, Italy where students have an opportunity to learn about another country's practices and policies in caring for children, families, and the elderly, as well as learning to live in another country.

After retiring Margaret spent time with her family and friends and worked on a variety of writing projects, including writing a regency romance novel and a children's book. She was also a member of a memoir writing group.

A celebration of life will be announced at a future date.

The family thanks the staffs of the Mount Nittany Medical Center, the Shaner Cancer Center, and Juniper Village for support during her last illness. In lieu of flowers, Margaret might suggest supporting children's education and welfare, adopting a cat, or reading a book to a child.

A memorial service for Margaret is planned for Saturday, October 15, 2022, 11:00 a.m., at the Unitarian Universalist Fellowship of Centre County, 780 Waupelani Drive, State College, PA 16801. Members of the Fellowship and friends of the family are invited to attend. The service will also be available on a Zoom link, which may be found at the Fellowship site -- https://uufcc.com/.

Share Your Memory of
Margaret
Upload Your Memory View All Memories
Be the first to upload a memory!
Share A Memory