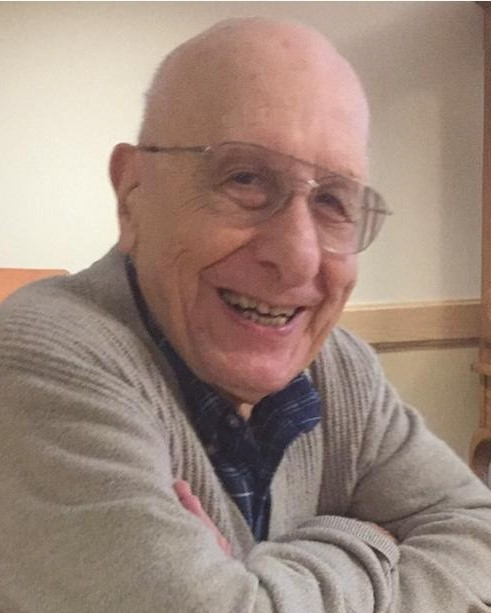 Alfred Angelo Triolo (April 11, 1927-October 2, 2022), beloved husband, father, grandfather, and professor, died peacefully at age 95 at Foxdale Village Retirement Community in State College, where he had lived and been well cared for since 2015. A service for Al will be held at Our Lady of Victory in State College at 11:30 am Monday, Obtober 10, followed by interment at the Centre County Memorial Park. A celebration of life reception will be held at Foxdale Village at 3:00 pm. Born in 1927 in Brooklyn to Carmelo Triolo and Stella Triolo née Errante (both of Sicilian birth, immigrants, and naturalized citizens of the U.S.A.), Alfred concluded his career as Associate Professor Emeritus of Italian and Spanish in the Department of Spanish, Italian and Portuguese at Penn State University, where he taught from 1957 to 1996. He specialized in late medieval and Renaissance Spanish and Italian literature, with a focus on the works of Dante Alighieri, and authored many published studies in his field. It is no exaggeration to say that his dedicated teaching in the fields of both language and literature inspired generations of students. After a lively childhood that included playing stickball on the streets of his native Brooklyn and eating his mother's vegetable-oriented Sicilian cooking, which he later considered the secret to his longevity, he showed prodigious early academic talent, skipping a grade and earning his B.A. at City College, NY, Masters at Colombia University, NY, and doctorate at the University of Illinois, Urbana-Champaign with a dissertation on the influence of Petrarch on late medieval Spanish poetry. It was at the latter university, in the early 1950s, that Alfred met and married concert pianist Phyllis Anita Triolo née Lightfield of Minneapolis, MN, recently back from a two-year Fulbright at the Conservatory in post-war Paris, and working on a Master's in performance. After a temporary position at the University of Michigan, Ann Arbor, and the birth of their first child, Julia, they moved to State College in 1957, where he had been offered a tenure-track position at Penn State and Phyllis hoped to build a musical career. In 1970 Alfred brought his young family to Rome, Italy, for a six-month sabbatical, during which time he carried out research on Dante at the Vatican Library and the Casa di Dante Research Center. He particularly enjoyed traveling in the country of his parent's birth, Italy, and roamed widely in the provinces of Umbria, Tuscany, the Emilia Romagna, and Liguria, in some cases during tours orchestrated by eldest daughter Julia from her perch in Rome. He was an avid connoisseur of Italian food in all its glory, and was particularly fond of a good risotto. While a Europeanist at heart, Al also displayed significant interest in other cultures and religions, and travelled to Asia in 1996 to Beijing China to visit his son Paul, who was then working there. He often engaged in lively discussions with his children about Eastern and Western religions including Buddhism, and had a deep knowledge of the history of Western Christendom, which he credited with moulding Western civilization. An avid student of current affairs, after his retirement he wrote letters to the editor at the CDT, consumed high volumes of TV news, and often engaged in extended and lively banter on current affairs with his son Paul, a foreign policy pundit. As a teacher, Dr. Triolo as he was known, was a popular figure on campus. He poured prodigious energy into his teaching, and was particularly adept at conveying the key elements of Dante's Divine Comedy to audiences of all levels. While visiting Beijing, for example, he appeared as a visiting professor at his grandson Nicholas' school and delivered a stellar lecture on Dante pegged to elementary school children. At first with a pipe, and later with various types of cigars, Professor Triolo was able to bring even the most complex historical allegory to life in his lectures and at social gatherings. Indeed, Al and his late wife Phyllis engaged in a lively social life, often entertaining Penn State colleagues a large circle of local friends and frequently hosting a long-lived book discussion club. Alfred, whose wife Phyllis died in 1984, is survived by their four children: Julia Catherine Triolo and husband Roberto Gabrielli (of Rome, Italy), Marc Dante Triolo and wife Barbara Triolo (of San Jose, CA), Paul Stephen Triolo and wife Helen Triolo (of Rockville, MD), and Anne Elizabeth Triolo (of State College, PA, lecturer in the Department of English, Penn State University), and six grandchildren [Giacomo Gabrielli, Nicholas Christopher Triolo, Sarah Chiara Clark (who with her husband John Clark, expects a baby next spring), Ian Paul Gabrielli, Ryan Triolo and Jordan Triolo]. Alfred was also predeceased by his younger brother, Victor A. Triolo (1932-2016) of Easton, CT, a professor of Information Studies at Southern Connecticut State University. While he grew up cheering the Brooklyn Dodgers baseball team (could boast he saw Jackie Robinson play!), later in life Al became an avid Penn State football fan. He will be sorely missed by his family and extensive cohort of friends, colleagues, book group members, and former students, for his characteristic warm wit and conversation, his vast knowledge, his infectious smile, and generosity of spirit. The family welcomes donations in Al's name to the following charities: Centre County YMCA Backpack Program Centre County Volunteers in Medicine Centre County Food Bank
To send flowers to the family or plant a tree in memory of Alfred Triolo, please visit Tribute Store
Monday
10
October

Share Your Memory of
Alfred
Upload Your Memory View All Memories
Be the first to upload a memory!
Share A Memory
Send Flowers
Plant a Tree