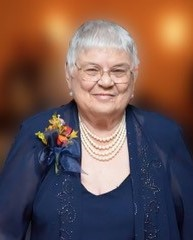 Ruth C. Kistler, of State College, PA, died on Monday at the Atrium of The Village at Penn State. She was 99.

Ruth was a woman of service to her family and community. If there was a need, Ruth was eager to find a solution. Born on November 16, 1923, in Dushore, PA, she was the daughter of the late Susie Alice Morrison and the Rev. A. Ward Campbell. Ruth graduated from Altoona High School in 1941 and moved to State College, PA, where she met the love of her life, James Kistler. They were married on August 28, 1943, in Bloomsburg, PA. During World War II, they lived in Philadelphia, and after the war, they moved to the Kistler family farm in Bloomsburg, PA.

Prior to starting a family, Ruth worked as a secretary at Penn State and several other locations. When Ruth and Jim's children were older, Ruth served as Harris Township manager, the first woman to do so in Centre County and one of a handful of women township managers in the state at the time. After retiring from the township, she worked as a real estate agent for several years.

Ruth was an active member of Zion Lutheran Church in Boalsburg, PA, from 1950–1976, serving as organist and choir director for many years, as well as church secretary and Sunday school teacher, and participating in many other church activities. Music was one of her talents, raising her spirits and filling her with joy. She was the go-to wedding soloist for nieces, nephews and many friends.

From 1976 until her death, she was a member of Grace Lutheran Church. Ruth sang in the choir and was active in the Daughters of Eve Women's Circle. Service to the wider church was a priority for her and she held various leadership positions, including president of Allegheny Lutheran Church Women and delegate to synod, state and national conventions. She was elected vice president of Allegheny Synod, the most senior lay position in the synod. In that capacity, Ruth presided over board meetings and provided leadership in the early years of the new Evangelical Lutheran Church in America.

In 1970, Ruth trained as a Laubach Method tutor to teach adults to read. Inspired by a presentation at the Lutheran Church Women's Convention, she founded the Mid-State Literacy Council (MSLC) in 1971 and became its first tutor. She and others built the organization into a thriving group with paid staff and a board of directors. For many years, Ruth was the student-tutor coordinator and chaired the board of directors. In May 1996, she was honored with the JCPenney Award, and in 2013, MSLC established an award in Ruth's name to honor outstanding service in adult literacy. Today, over 200 volunteers provide English as a second language and basic literacy instruction to more than 200 adults in Centre and Clearfield counties every year.

In life and in retirement, Ruth enjoyed traveling, reading, and spending time with family. Ruth and Jim traveled across the United States, Canada, Europe, the South Pacific, and Japan. In retirement, Ruth traveled to Kenya to represent the Allegheny Synod of the Evangelical Lutheran Church in America, and in the last decade of her life, she visited her son in Colombia.

Ruth was preceded in death by her husband, parents, a sister, and a brother. She is survived by three children: Dotty Delafield and her husband, Gary, of Boalsburg, PA, Marjorie Morgan of Doylestown, PA, and Gerry Kistler and his wife, Liliana Giraldo Chavez, of Armenia, Colombia. She is also survived by 11 grandchildren and 15 great-grandchildren. Ruth will be sorely missed by all who knew her: family, dear friends, and the community she loved and served. She was a woman of energy and determination.

A celebration of Ruth's life will be held at Grace Lutheran Church, 205 S. Garner Street, State College, PA, at 11 a.m. on Saturday, December 17, 2022. The family will receive friends prior to the service, beginning at 10 a.m. Internment will be at the convenience of the family.

In remembrance of Ruth, those who wish may make contributions to Mid-State Literacy Council, 248 E. Calder Way, #307, State College, PA 16801 (online contributions: https://www.mid-stateliteracycouncil.org/) or to the CROP Walk at https://events.crophungerwalk.org/2022/team/ruth-kistlers-memorial-team.

Arrangements are under the care of Koch Funeral Home, State College.  Online condolences may be entered at www.kochfuneralhome.com or visit us on Facebook.

Share Your Memory of
Ruth
Upload Your Memory View All Memories
Be the first to upload a memory!
Share A Memory