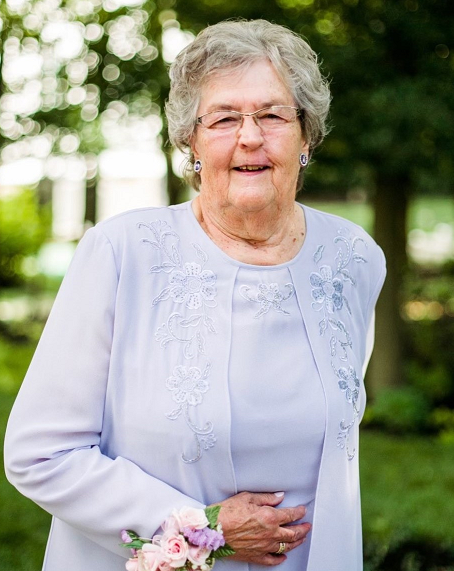 Born April 22, 1932 in Houserville, she was the daughter of the late John D. and Anna Houser Dreibelbis.

She is survived by two sons, Russell Judy of Centre Hall, and Daryl Judy of Washington, DC; six grandchildren, Ashley Mason and her husband Chris, Alanna Steffens and her husband Patrick, April Judy, Clinton Judy and his wife Bethany, Trey Judy, and Ross Judy; seven great-grandchildren, London, Madison, Taylor, Ryan, Charles, Parker, and Harrison; two sisters-in-law, Barb Dreibelbis and Barbara Ray; and her brother-in-law, Robert Judy and his wife Carol. She was also "Aunt Mae" to dozens of nieces and nephews and great-nieces and nephews. She was preceded in death by her son, Brian Judy; her brother, J. Henry Dreibelbis; and her sister, Laura Homan.

Mae was the Lead Administrator in the Nursing Department at the Pennsylvania State University before her retirement.

She was very active in the community and pursued many interests. She volunteered at the Central PA Blood Bank, Central PA American Red Cross, and for the Centre County Courthouse. She also worked in Head Quarters for the Grange Fair and participated in the Baileyville Grange.

She was a member of The Lady Evelyn Lodge & Odd Fellow Lodge #1032 Cassville, and she held PA state office for the Odd Fellows and Rebekahs. She also organized and attended busloads of teenagers for The Odd Fellows United Nations Pilgrimage for Youth.

Mae had a love for flowers and gardening. She was also an avid reader and loved all Penn State sporting events, especially Penn State Football and the Pittsburgh Steelers. You could often find her attending a local fire company parade, a weekend with her friends at Lodge, and of course, The Great Grange Fair.

There will be a second visitation from 9:30 until 10:30 am on Saturday, January 7, 2023 at Grace United Methodist Church, 127 S. Pennsylvania Ave, Centre Hall. Funeral service will follow at the church at 10:30 am with The Reverend Debra Dailey officiating.

To send flowers to the family or plant a tree in memory of Mae Judy, please visit Tribute Store
Friday
6
January

Share Your Memory of
Mae
Upload Your Memory View All Memories
Be the first to upload a memory!
Share A Memory
Send Flowers
Plant a Tree