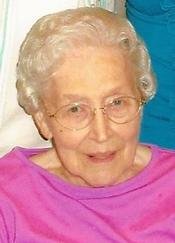 Nellie Garreta Girvin Boyle, 93, of State College, passed away on Tuesday, March 20, 2012 at the Huntingdon J. C. Blair Memorial Hospital after a short illness. She was born April 10, 1918 in Kansas City, KS the oldest of three children to Garrett A. and Edna Mae (Reeder) Girvin , who preceded her in death; along with two brothers Warren and Laurance Girvin. She is survived by two daughters, Elizabeth B. Taylor, of Mount Union, Margaret B. White and her husband, Eric, of Los Altos, CA and four grand children and two greatgrandchildren. Nellie was also preceded in death by an infant brother John David Boyle and a brother David Stephen Boyle. She grew up in Wichita, KS; graduated from The University of Wichita (now Wichita State) with a B. S. in Science, in 1939. The next two years she taught home economics in Cheney, KS. Nellie married John S. Boyle on June 7, 1941 on his 24th birthday. They celebrated 69 years of marriage until his death in 2010. While John served in the Navy during WWII she followed him on assignments. After the war they moved to Madison, WI, where two of their children were born. In 1949, the family moved to State College where they became active in many town and gown activities. Centre County was to be their life time home. Twice she was employed at Penn State and retired in 1982 from the College of Human Development and Family Studies. After she retired she became President of the Hemlock Girl Scout Council. She was activity involved in all aspects of local Girl Scouting from troop leader, day camp director, and representing the council in national meetings in various states. Other organizations she was active in, as well as, holding various leadership positions were: Centre County Home Economics and Family Studies and State College branch American Federation of Women,Centre Hall chapter. Until recently she was very active in the State College branch of A.A.U.W. and co-chaired their annual used book sale for many years. Since, 1949, she has been an active member of St. Pauls United Methodist Church ranging from Chair of the Board of Trustees, Sunday School Teacher and supporting the United Methodist Women in decades of activities. She will be sadly missed by her family, grandchildren, and friends. Visitation will be held from 11:30-1:00 p.m. on Monday, March 26, 2012 at Koch Funeral Home, 2401 S. Atherton St., State College. Funeral service will follow at 1:00 p.m. at the funeral home with the Rev. Dr. G. Edwin Zeiders and Rev. Julia Piper officiating. Entombment will be at Centre County Memorial Park. Memorial contributions may be made to: A.A. U. W. State College Branch Scholarship, P.O. Box 735, State College, Pa 16804 or to St. Pauls United Methodist Church Growth Fund, 109 McAllister Street, State College, Pa 16801 Arrangements are under the care of Koch Funeral Home, State College. Online condolences may be made at www.kochfuneralhome.com
To send flowers to the family or plant a tree in memory of Nellie Boyle, please visit Tribute Store

A Memorial Tree was planted for Nellie
We are deeply sorry for your loss ~ the staff at Koch Funeral Home
Join in honoring their life - plant a memorial tree
Services for Nellie Boyle
There are no events scheduled. You can still show your support by sending flowers directly to the family, or planting a memorial tree in memory of Nellie Boyle.
Visit the Tribute Store
Print
Share A Memory
Send Flowers
Plant a Tree