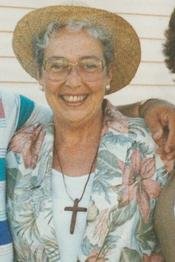 Patricia Louise Ficarra of State College passed away on Wednesday, March 21, 2012 at Mount Nittany Medical center and will be dearly missed by her family and friends. She was preceded in death by her older brother, Jack Kline and parents Fred and Louise Kline of Boalsburg. Born on February 13th, 1936, Pat graduated from State College High School in 1953 and married her first love Maynard Holsopple on May 1st, 1954 where she remained with him for 30 years until his death in 1984. In 1985, she was again joined in matrimony to Anthony Ficarra and stayed devoted to him for 25 years until his death in 2010. During this time span, Pat worked at Penn State Admissions for over 20 years. Pat was strongly devoted to and very active with St. Johns UCC where she taught Sunday School for many years, as well as embraced the role of assistant director of the Junior Choir. She took her faith and calling to heart and became a Lay Minister at the Howard and Jacksonville UCC after completing training at the Lancaster Seminary. Pat loved and was strongly devoted to her children, grandchildren, and great grandchildren and spent as much time possible watching them all play softball, baseball, basketball, wrestling, soccer, gymnastics, and volleyball. She also loved Penn State Football and Womens Basketball and especially enjoyed picnics and meditation at Whipples Dam. Pat is survived by her five children and their families that include Ronald and Dawn Holsopple, Richard and Trudy Holsopple, Kathryn Holsopple and Bob Reeder, Beth and Albert Segall, and Randy and Kim Holsopple, as well as grandchildren Scott Holsopple, Mathew and Jessica Auman, Stephanie, Nathaniel, and Jonathan Leonard, Samantha Davis, Sarah and Jacob Segall, Morgan and Jordan Holsopple, and great grandchildren Sadie Mae and Jonah Libby, Travis and Jaden St. Clare, and the youngest, Natalie Leonard, as well as her beloved dog A.J. The memorial service for Pat will be held on Thursday, March 29, 2012 at 2:00PM at St. Johns United Church of Christ, Church Street, Boalsburg PA 16827 and will be officiated by Pastor Monica Ouellette. Please make any memorial contributions to St. Johns United Church of Christ at 218 North Church Street, Boalsburg, PA 16827. Arrangements are under the care of Koch Funeral Home, State College. Online condolences may be made at www.kochfuneralhome.com.
To send flowers to the family or plant a tree in memory of Patricia Ficarra, please visit Tribute Store

A Memorial Tree was planted for Patricia
We are deeply sorry for your loss ~ the staff at Koch Funeral Home
Join in honoring their life - plant a memorial tree
Services for Patricia Ficarra
There are no events scheduled. You can still show your support by sending flowers directly to the family, or planting a memorial tree in memory of Patricia Ficarra.
Visit the Tribute Store
Print
Share A Memory
Send Flowers
Plant a Tree