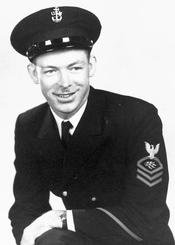 David Errett Harris, 95, of State College, formerly of Boalsburg, passed from this life on Mar. 21, 2012, at The Atrium at The Village at Penn State in State College. Born Aug. 11, 1916, in Meyersdale, he was the son of David Arthur Harris and Mary Myrtle Eicher Harris. He spent his early life in Allegheny and Crawford Counties and graduated from Meadville High School in 1933. Following high school, he worked for a building contractor as a painter and an electrician. In 1940, he enlisted in the Naval Communications Reserve. He was called to active duty in March 1941 and ultimately served 4½ years, attaining the rank of chief petty officer. He spent the bulk of his Navy career as a radio technician at the Cape May Navy Section Base in Cape May, N.J. On Dec. 26, 1946, in New Kensington, he married Sarah Elizabeth Clark, who survives. He attended Carnegie Institute of Technology, earning a B.S. in electrical engineering in 1948 and an M.S. in electrical engineering in 1949. After college, he joined Haller, Raymond and Brown (later HRB-Singer) in State College, where he was involved in infra-red system development. His most interesting project was the development of an infra-red system for the then-top secret SR-71 spy plane, the successor to the U-2. He left HRB in 1968 and spent the next two years at Melpar, Inc., in Falls Church, Va. In 1970, he returned to HRB for another five years, retiring in 1975. He then joined Locus, Inc., in Boalsburg. He retired from Locus in 1981. His lifelong hobby was amateur radio. Licensed as W3ZX, he logged contacts with amateurs in more than 175 countries over a period of 67 years. He was a charter member of the Nittany Amateur Radio Club and a member of the American Radio Relay League. He was a registered professional engineer in Pennsylvania and a member of the Bucktail Chapter of the Pennsylvania Society of Professional Engineers. He enjoyed square dancing with the Centre Squares and bowling in the State College Retirees League. He was a member of St. Paul's United Methodist Church in State College, where he belonged to the Men's Brotherhood Class. In addition to his wife, he is survived by his children, Beth H. McMullen and her husband, Timothy, of Noblesville, Ind., M. Jane Harris of State College, David C. Harris and his wife, Jo Ann, of Millersville, and Robert S. Harris of Pleasant Gap. He is also survived by his grandchildren, Christopher D. Harris and his wife, Trista, of Cochranville, Brian M. Harris and his wife, Ellie, of Waco, Texas, Erin McMullen Jonaitis and her husband, Graham, of Madison, Wis., and Matthew C. Harris of Spring City; nine great-grandchildren; and one brother, Joseph S. Harris, and his wife, Judy, of Lower Burrell. His tenth great-grandchild is expected in August. He was preceded in death by his parents; a brother, Charles R. Harris; a sister, Emily L. Park; and a daughter-in-law, Mary Ann Formica Harris. A celebration of David's life will be held at 11 a.m. on Apr. 17 at St. Paul's United Methodist Church in State College. A light luncheon will follow in the church social room. Memorial contributions may be made in David's name to St. Paul's United Methodist Church Growth Fund, 109 McAllister Street, State College, PA 16801. Online condolences may be made at www.kochfuneralhome.com.
To send flowers to the family or plant a tree in memory of David Harris, please visit Tribute Store

A Memorial Tree was planted for David
We are deeply sorry for your loss ~ the staff at Koch Funeral Home
Join in honoring their life - plant a memorial tree
Services for David Harris
There are no events scheduled. You can still show your support by sending flowers directly to the family, or planting a memorial tree in memory of David Harris.
Visit the Tribute Store
Print
Share A Memory
Send Flowers
Plant a Tree