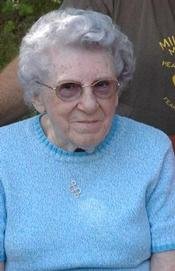 Thelma M. Hawbaker,91 of State College, beloved wife, mother and friend to all, passed away Friday March 23, 2012 at the home of her daughter Marie. She was born January 13, 1921 in Waynesboro, PA, Franklin County. She was the daughter of the late Abram R. and Mary Stamey Benedict. On July 20, 1938 she married Glenn O. Hawbaker with who she was the Co-Founder of Glenn O. Hawbaker, Inc, of State College and Hawbaker Groves of McAllen,Texas. Thelma was a 1938 graduate of Greencastle High School and a member of the McVeytown Church of the Brethren and the Eastern Star. She was preceded in death by her husband Glenn on November 27, 2004. Following the passing of her husband she loved spending time with her children, grandchildren and great grandchildren and traveling. Thelma is survived by one daughter and three sons, Marie H DeVinney of Petersburg, Daniel R. Hawbaker and his wife Suzie of Port Matilda, Glenn O. Hawbaker Jr, and his wife Barbara of Petersburg and Alan G. Hawbaker and his wife Ginger of Port Matilda . Also surviving are one brother, Robert Benedict and his wife Winifred of Sebring FI. and one sister in-law, Jean Benedict of Waynesboro. She is also survived by 13 grandchildren and 21 great grand children. She was preceded in death by one sister, Janet Smith of Moorefield WV, and two brothers, Harry Benedict of Mercersburg, and C. Guy Benedict of Waynesboro. The family will receive friends on Monday, March 26, 2012 from 4 until 9 p.m. at the Koch Funeral Home, 2401 South Atherton Street, State College, PA 16801 Funeral services will be private at the convenience of the family. Burial will be in Centre County Memorial Park In lieu of flowers Thelma has requested that Memorial Contributions be made to: The Stone Valley Community Charter School, PO Box 44 Pine Grove Mills PA, 16868 or the Youth Service Bureau, 325 W. Aaron Drive State College, PA 16803 Online condolences may be made at www.kochfuneralhome.com.
To send flowers to the family or plant a tree in memory of Thelma Hawbaker, please visit Tribute Store

A Memorial Tree was planted for Thelma
We are deeply sorry for your loss ~ the staff at Koch Funeral Home
Join in honoring their life - plant a memorial tree
Services for Thelma Hawbaker
There are no events scheduled. You can still show your support by sending flowers directly to the family, or planting a memorial tree in memory of Thelma Hawbaker.
Visit the Tribute Store
Print
Share A Memory
Send Flowers
Plant a Tree