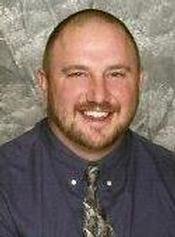 Robert C. Hoffman, Jr., 37, of Port Matilda, died Sunday, March 25, 2012 at his residence. Born October 5, 1974, in Bristol, he was a son of Robert C. and Gayle Gouldey Hoffman, Sr. He married Amara L. Canner on August 2, 1997, who survives. He is survived by three children, Arianna L., Kaylana R., and Donovan R. Hoffman, all surviving at home. He is also survived by paternal grandmother, Ruth Hoffman, of Levittown and maternal grandmother, Patricia Gouldey, of Souderton. He was predeceased by a sister, Krista Hoffman, who died July 18, 2005 and grandfathers, Erdman Hoffman and Donald Gouldey. Robert was a 1992 graduate of Harry S. Truman High School, Levittown. He was a Certified Respiratory Therapist at Mount Nittany Medical Center since July, 2005. He was a member of the Fairless Hills Masonic Lodge #776 and American Association for Respiratory Care. He enjoyed raising a wide variety of animals, hunting, carpentry and house remodeling. He was also involved with Boy Scouts and wrestling and was an Eagles and Phillies fan. Visitation will be 2 to 4 p.m. and 6 to 8 p.m. on Wednesday, March 28, 2012 at Koch Funeral Home, 2401 S. Atherton St., State College. Memorial service will be at 11:00 a.m. on Thursday, March 29, 2012 at the funeral home. Memorial Contributions may be made to the Hoffman Children Memorial Fund at Clearfield Bank & Trust, 511 Pine Grove Road, State College, PA 16801. Arrangements are under the care of Koch Funeral Home, State College. Online condolences may be made at www.kochfuneralhome.com.
To send flowers to the family or plant a tree in memory of Jr. Hoffman, please visit Tribute Store

A Memorial Tree was planted for Jr.
We are deeply sorry for your loss ~ the staff at Koch Funeral Home
Join in honoring their life - plant a memorial tree
Services for Jr. Hoffman
There are no events scheduled. You can still show your support by sending flowers directly to the family, or planting a memorial tree in memory of Jr. Hoffman.
Visit the Tribute Store
Print
Share A Memory
Send Flowers
Plant a Tree