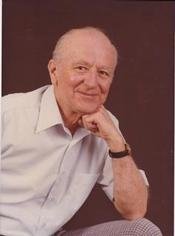 Edward Adam Rauff, 95, formerly of Detroit, MI, died Friday, April 27, 2012, at his home in State College. Ed was born June 8, 1916, in McKees Rocks, PA, the son of Adam Rauf and Mary Rauff. As a child he moved with his family to Detroit, where he graduated from Cass Technical High School. He met his wife-to-be, Yvonne Elaine Vernon, while both were employed by the United Artists Theater in Detroit. They were married December 19, 1942, in Detroit. During World War II, Ed was a sergeant in the medical division of the U.S. Army. He served as an X-ray technician in the Pacific Theater from February 1943 to March 1946. Ed attended the Detroit Institute of Technology and then became a food and dairy inspector for the city of Detroit and later for the state of Michigan. He retired in 1986. Ed and Yvonne lived in Southfield and Novi, MI, before moving to State College in 1993. Ed was a member of Trinity Lutheran Church in State College. During his retirement he enjoyed golfing, reading, and discussing local and national issues. He frequently expressed his views by writing letters to the editor. Ed valued education and family, and he was very proud of his children's and grandchildren's accomplishments. Ed is survived by his wife, Yvonne; son and daughter-in-law, James and Rebecca Rauff of Decatur, IL; daughter and son-in-law, Yvette Rauff and Andre Koslowski of Boalsburg; and two grandchildren: Katrina Bautista of State College and Andrew Rauff of Decatur, IL. He is also survived by his sister, Dorothy Hall of Destin, FL, and several nieces and nephews. He was preceded in death by his parents. The Rauff family would like to thank Darlene Fink for her excellent and devoted care of Ed during the last year of his life. A memorial service will be held at a later date. Memorial gifts may be made to the Salvation Army or to Trinity Lutheran Church, 2221 N. Oak Lane, State College, PA 16803. Online condolences may be left for the family at www.kochfuneralhome.com.
To send flowers to the family or plant a tree in memory of Edward Rauff, please visit Tribute Store

A Memorial Tree was planted for Edward
We are deeply sorry for your loss ~ the staff at Koch Funeral Home
Join in honoring their life - plant a memorial tree
Services for Edward Rauff
There are no events scheduled. You can still show your support by sending flowers directly to the family, or planting a memorial tree in memory of Edward Rauff.
Visit the Tribute Store
Print
Share A Memory
Send Flowers
Plant a Tree