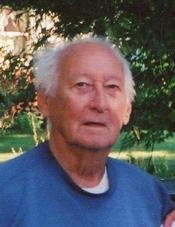 Delbert L. Bierlein, 90 of Pennsylvania Furnace, died Friday, June 29, 2012 at Mount Nittany Medical Center, State College. Born November 30, 1921 in Flint Michigan, he was the son of the late Henry C. and Amelia Margaret Zink Bierlein. He was married on August 16, 1947 to Ella Schmandt who survives. He is survived by four children, Catherine Schroeder and her husband Hartmut of Franklin, Massachusetts, Dr. Alan Bierlein of Goshen, Indiana, Chuck Bierlein and his wife Lisa of State College and David Bierlein and his wife Barbara of Spring Mills. He is also survived 13 grandchildren and 7 great grandchildren. He was preceded in death by a son Matthew on August 6, 1993. Delbert graduated in 1952 with a Bachelor's Degree and in 1954 Master's Degree in Soil Science both from Michigan State University. He was a charter member of the Good Shepherd Evangelical Lutheran Church. He was a veteran of the Army Air Corps serving during W. W. II. He was employed as a Researcher by the Agricultural Services, US Department of Agricultural retiring in 1989 after 30 years of service. He was also a certified Entomologist. Friend will be received at Koch Funeral Home, 2401 South Atherton Street, State College, on Monday July 2, 2012 from 6 until 8 p. m. and one hour prior to the service at the church. Funeral service will be at 11:00 a.m. on Tuesday, July 3, 2012, at Good Shepherd Evangelical Lutheran Church, 851 North Science Park Road, State College, PA 16803 with the Rev. Bryan Spang officiating. Burial will be at the Graysville Cemetery, Pennsylvania Furnace. Memorial contributions may be made to the Lutheran Hour Ministries,660 Mason Ridge Center Drive, St. Louis, Mo 63141 and the Leukemia and Lymphoma Society, 1311 Mamaroneck Ave., Suite 310, White Plains, NY 10605 Arrangements are under the care of Koch Funeral Home, State College. Online condolences and signing of the guestbook may be made at www.kochfuneralhome.com.
To send flowers to the family or plant a tree in memory of Delbert Bierlein, please visit Tribute Store

A Memorial Tree was planted for Delbert
We are deeply sorry for your loss ~ the staff at Koch Funeral Home
Join in honoring their life - plant a memorial tree
Services for Delbert Bierlein
There are no events scheduled. You can still show your support by sending flowers directly to the family, or planting a memorial tree in memory of Delbert Bierlein.
Visit the Tribute Store
Print
Share A Memory
Send Flowers
Plant a Tree