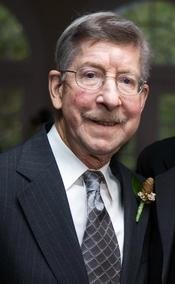 Wayne Loy Hockersmith, 81, of State College, passed away peacefully surrounded by family on August 15, 2012 at Mount Nittany Medical Center, State College. He was known affectionately as Butch to many friends and family. Born June 11, 1931, in New Cumberland, Pa. he was the son of the late Raymond E. and Bertie Colvin Hockersmith and also predeceased by his brother William. He was first married to Mary Lou Fisher on June 20, 1953 who passed away on December 11, 2002. He later married Ann Fry Barnes on February 19, 2009 who lives in State College, Pa. He is also survived by three children, Lesa H. Kestler and her husband, Tom, of Purcellville, VA, Jeffrey L. Hockersmith, of Ft. Lauderdale, FL, Terri H. Fletcher and her husband, Don, of Wyckoff, NJ, four step children, Scott Barnes and his wife, Alexandra, of Scottsdale, AZ, Andrew Barnes and his wife, Dolores, of Rockville, MD, David Barnes and his wife, Anna, of Indianapolis, IN, Elizabeth Ashley Barnes, of San Francisco, CA; six grandchildren, Jason Kestler, Kevin Kestler, Chris Fletcher, Jacqueline Kestler, Donny Fletcher, Landree Fletcher and two great grandchildren, Grace and Tripton Kestler. Wayne was a 1949 graduate of New Cumberland High School and a 1953 graduate of Penn State University in Civil Engineering. He was a member of the Sigma Alpha Epsilon fraternity where he served as chapter president. Upon graduation he enlisted in the U.S. Army where he served until 1955. He spent 32 years of his professional career at Pfizer concluding as a Divisional President. A long time resident of Wyckoff, N.J., he retired to Seabrook Island S.C. where he was actively involved in Habitat For Humanity serving as President of the local chapter. Wayne loved spending time with family and friends and enjoyed tennis, golf and travel. After moving to State College he enthusiastically supported all Penn State sporting events especially Nittany Lion football and lacrosse. He was an All American lacrosse player at Penn State and endowed multiple athletic scholarships. A memorial service will be held at 1:00 p.m. on Wednesday, September 5th at the Trinity United Methodist Church, 415 Bridge St., New Cumberland, PA. Burial will be in Mt. Olivet Cemetery, New Cumberland. Memorial contributions may be made to Sea Island Habitat for Humanity, 2545 Bohicket Road, Johns Island, S.C. 29455 Online condolences and signing of the guest book may be entered at www.kochfuneralhome.com.
To send flowers to the family or plant a tree in memory of Wayne Hockersmith, please visit Tribute Store

A Memorial Tree was planted for Wayne
We are deeply sorry for your loss ~ the staff at Koch Funeral Home
Join in honoring their life - plant a memorial tree
Services for Wayne Hockersmith
There are no events scheduled. You can still show your support by sending flowers directly to the family, or planting a memorial tree in memory of Wayne Hockersmith.
Visit the Tribute Store
Print
Share A Memory
Send Flowers
Plant a Tree