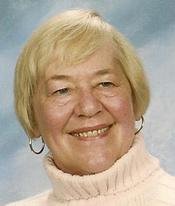 Barbara Ann Copland lost her battle with lung cancer and went to her eternal home with The Lord on Friday, August 24, 2012. She passed away peacefully at her home in State College, Pennsylvania with her husband, Russell Meyers, by her side. Barb was graduated from the Wayne Memorial High School in the class of 1957, thus beginning a long career in education. She earned her BA from Western Michigan University in 1961. She continued her quest for education at The University of Missouri, and received her MS in Education in 1966. She completed her formal education earning her PhD in Higher Education from the Pennsylvania State University in 1980. Barb went on to hold various positions at Penn State during her 27-year career including running the Returning Adults Student Center. At the time of Barb retirement in 2004, she was an administrator in Judicial Affairs. 2005 was a turning point in Barb's life. At the ripe young age of 66, she married Russ, who survives her at home. Barb has two sons from a previous marriage to the late Fred Wood: Andrew Wood and wife Christine of Milburn NJ, and Christopher Wood living in Englewood, CO. Through the magic of blended families, her extended family includes Pam and Charles McLaughlin of Stamford, CT., and Steven and Karen Haver of Reading, PA., as well as six grandchildren; Nathan and Connor Wood, Kara and Colin McLaughlin, and Kelsey and Jeremy Haver. Barb is one of eight children born to her mother, Marget and father, William A. Copland, both deceased. She is survived by four sisters and three brothers. Her sisters are Joni Fuchs, Sheri MacDonald, Cathy Marcson, and Suzi Church, all of Wayne MI. Her brothers are Bill Copland, Wayne, MI, Robert Copland, Canton MI, and Butch Copland, Northville, MI. Barb and Russ are members of the State College Presbyterian Church, where they are members of the College Age Ministry committee. They were also active in the Young at Heart organization at the church. Barb was a very active woman until her health suddenly began to decline. She was a member of Blue Course Ladies Golf League and various health clubs. She was a volunteer at the Woman's Resource Center, for many years. Barb was on the Board of Directors of the Center for Alternatives in Community Justice, Alpha Omega Chi Sorority, and Women's Welcome Club. Barb was very interested in wine. She is a life member of the American Wine Society. She served as chairperson for the Mount Nittany Chapter of the AWS. She and her husband traveled to many areas known for their wine. While the list is too long to enumerate here, it includes Bordeaux, Napa Valley and Sonoma, The Finger Lakes, and many other appellations. As a matter of fact, she met her husband-to-be at an AWS amateur wine competition. There will be a private viewing for the family. A memorial service will be held in the State College Presbyterian Church on Saturday, September 8, 2012 at 2:00 P.M. In lieu of flowers, memorials may be made to the State College Presbyterian Church or the American Cancer Society. Funeral arrangements are being handled by the Koch Funeral Home in State College. Online condolences to www.kochfuneralhome.com.
To send flowers to the family or plant a tree in memory of Barbara Copland, please visit Tribute Store

A Memorial Tree was planted for Barbara
We are deeply sorry for your loss ~ the staff at Koch Funeral Home
Join in honoring their life - plant a memorial tree
Services for Barbara Copland
There are no events scheduled. You can still show your support by sending flowers directly to the family, or planting a memorial tree in memory of Barbara Copland.
Visit the Tribute Store
Print
Share A Memory
Send Flowers
Plant a Tree