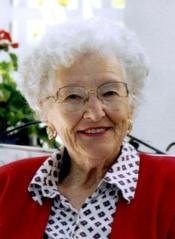 Edith Virginia Dale Ricker, 104, passed away in her State College home on September 10, 2012. Virginia Ricker, a descendent of Christian Dale, one of the Centre Regions' earliest settlers, was born on September 21, 1907 on Shady Dale Farm along Slab Cabin Branch Creek in a house built by her great grandfather. She was the daughter of Mary Fry Dale and Charles Milton Dale. Virginia attended the Branch School House on the edge of her family's 145 acre dairy farm, and then Fraser Street School. She graduated from State College High School in 1925 from which she received the Distinguished Alumnae Award. She went on to Penn State where she earned a degree in English in 1929. While in college, she was a charter member of the Beta Mu Chapter of Phi Mu Sorority and sang in the University Choir and Girl's Glee Club. In 1936, she earned a Master's in Education and Counseling from Penn State. Virginia began her teaching career at Hublersburg High School, and Abington High School and went on to teach at Dickinson College, and the Penn State Center at Harrisburg. She became a full-time faculty member in the Speech Department, and later, in the English Department at Penn State's University Park Campus. One of her courses, "Careers for Women," was the foundation of the Women's Studies Program at Penn State. She was the advisor to the Penn State Chapter of the English Honorary, Sigma Tau Delta, and served on its national board. She taught for forty years, retiring from Penn State in 1970. Along with her mentor, Julia Gregg Brill, Virginia served on the Penn State Alumni Council, and on the Penn State Foundation Board. During the formation of the Nittany Lion Club (originally the Levi Lamb Fund) which was under the leadership of her husband, Dr. Ralph. R. Ricker, she served as hostess for prospective members, entertaining large groups in the Ricker home. Virginia was a member of the Daughters of the American Colonists, where she served as a state officer, and the Daughters of the American Revolution. She was a member of the Centre County Historical Society, the State College Women's Club, Delta Kappa Gamma, the Boalsburg Historical Museum, the Penn State Alumni Association, the University Women's Club, AAUW, and Zion Lutheran Church. During her long life, Virginia Dale Ricker deftly managed to combine a full-time career as a faculty member with active participation in numerous community and professional organizations, all while cultivating and nurturing a wide network of friends, colleagues, younger academic women, fellow volunteers and alumni. Virginia Dale Ricker was devoted to the well-being and comfort of each and every friend. Named "Mrs. Hospitality" by Jo Chesworth in Town and Gown magazine in 1988: "…Virginia Ricker was known, over many decades in the Centre Region for her ebullient personality and for her boundless enthusiasm, welcoming countless guests to her family home on East White Hall Road, at the drop of one of her signature hats!" Mrs. Ricker was married to Ralph R. Ricker in 1936 at the Zion Lutheran Church in Boalsburg. Dr. Ricker, an historian, football coach, and athletic administrator, died in 1987. She is survived by two daughters: Mary Virginia Ricker Wilkes and her husband George Wilkes of Arlington, Virginia and Heather Dale Ricker-Gilbert and her husband Harvey R. Gilbert, of State College. She is also survived by six grandchildren: Burch, Christopher and Cabell Wilkes and Jacob, Rebecca Dale, and Alexander Ricker-Gilbert and by seven great-grandchildren: Caroline, Ricker, Charlotte, Chase, Delia, George and Evan Wilkes. A memorial service in celebration of Virginia's life will be held at Zion Lutheran Church, Boalsburg, Pa. on Sunday, November 11 at 2:00p.m. Friends will be received at the church starting at 1:00 that afternoon. Contributions in memory of Virginia Ricker may be made to the Centre Foundation, Inc. for the Virginia Dale Ricker Scholarship Fund at the State College High School, P. O. Box 648, State College, PA 16804; or to the Mt Nittany Conservancy, PO Box 296, State College, PA 16804.
To send flowers to the family or plant a tree in memory of Edith Ricker, please visit Tribute Store

A Memorial Tree was planted for Edith
We are deeply sorry for your loss ~ the staff at Koch Funeral Home
Join in honoring their life - plant a memorial tree
Services for Edith Ricker
There are no events scheduled. You can still show your support by sending flowers directly to the family, or planting a memorial tree in memory of Edith Ricker.
Visit the Tribute Store
Print
Share A Memory
Send Flowers
Plant a Tree