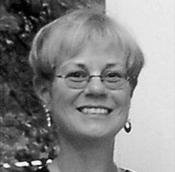 Barbara G. Deak passed away at Mount Nittany Medical Center early Wednesday morning, September 12, 2012 due to complications from cancer. Barb was born May 20, 1952 in Toledo, Ohio, the youngest of Harold and Margaret Gehm's six children. Soon after graduating from Rogers High School in 1970 and prior to matriculating at Miami University, she met her future husband, Robert Deak, who was home from college. One year later, to be with Bob, she transferred to The Ohio State University from which she graduated in 1974 with a Bachelor's degree in English. Barb and Bob were married June 19, 1973 and after their marriage of twenty-three years they remained close friends. Barb and Bob moved to State College in 1980, where they raised their two sons, Randall and Ryan. Barb devoted herself to them, passing on a love of literature and the arts. To satisfy her ever-present desire to create, she wrote poetry, sculpted, painted and drew. Barb also knitted, sewed, and crafted dolls, figurines and marionettes. Her creativity also extended to nature and she gardened enthusiastically. Barb beautified her home and surroundings by tending the gardens of her vacationing friends and the communal gardens in her neighborhood. Ranging from cats and dogs to the more exotic, Barb was a life-long lover of animals and cherished her many pets. She exercised vigorously, walking her dogs in excess of eight miles per day. An avid bowler for many years, Barb bowled each week with her friends as member of multiple bowling leagues, including the Friday Morning Coffee League. She contributed to the leagues by holding several offices, including treasurer. Barb so enjoyed bowling that when she developed tendinitis in her right elbow she learned to bowl left-handed. Barb was preceded in death by father Harold M. Gehm. She is survived by her mother, Margaret Drake Gehm of Dayton, OH, and two sons, Randall of Kansas City, MO, and Ryan and his wife, Casey, of Los Angeles, CA. She is also survived by her 5 siblings, Karen Balk and her husband, Richard, of Dayton, OH, Susan Brown and her husband, Thomas, of Parrish, FL, Linda Decker of Richmond, VA, Stephen Gehm of Chicago, IL, and twin sister, Ellen Gehm of Radcliff, KY. A celebration of life will be held at a date and time to be determined. Barb was a devoted mother, daughter, sister and friend. She was loved by many and will be dearly missed. Online condolences and signing of the guest book may be entered at www.kochfuneralhome.com.
To send flowers to the family or plant a tree in memory of Barbara Deak, please visit Tribute Store

A Memorial Tree was planted for Barbara
We are deeply sorry for your loss ~ the staff at Koch Funeral Home
Join in honoring their life - plant a memorial tree
Services for Barbara Deak
There are no events scheduled. You can still show your support by sending flowers directly to the family, or planting a memorial tree in memory of Barbara Deak.
Visit the Tribute Store
Print
Share A Memory
Send Flowers
Plant a Tree