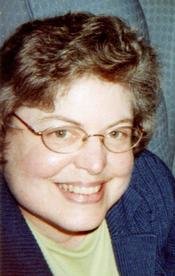 Suzanne Houts Moyer, 59, of State College died at home on Sunday, September 16, 2012 after a 15 month struggle with cancer; this she bore with grace and long-suffering and without murmurings and disputings. Born on April 29, 1953 in Bellefonte, she was the daughter of Robert F. and Betty Struble Houts and the granddaughter Calvin and Sarah Markle Struble and O.W .and Mary Barnes Houts. On April 20, 1990 she married Bart Moyer , who survives at home. She graduated from State College High School in 1971, completed a year in a music program at Wesley College in Delaware, and received a degree from South Hills Business School in 1987. In addition to her husband she is survived by her mother Betty Houts of State College, daughter Marianne and her husband, Jared Tietgen of Sioux Falls SD and son Joshua Dean of State College. Grandchildren are Candice Lagler, Ceylee, Tiffany, and Trig Tietgen of Sioux Falls, and Jaidyn Dean of Bellefonte. Also surviving are her brother Larry and his wife, Roberta Houts and nieces and nephews Elizabeth, David and his wife, Rachael and Steven Houts. She adored her grandchildren and cared for Jaidyn weekdays for a year prior to her illness. Other interests were reading and music and pet dogs; she played the flute, piccolo, Irish tin whistle, and piano. She was a long time member of the State College Area Municipal Band , played the flute for services at both Grace Lutheran and University Mennonite churches; she had strong ties to both churches and was a member of University Mennonite. She travelled in Europe with a high school music group, participated in several church service trips to the Dominican Republic, and travelled in Ireland with her mother. Friends and family will be received from 6-8 p.m., Thursday, September 20, 2012 at the Koch Funeral Home, 2401 S. Atherton St., State College. A memorial service will be held at 2:00 p.m. on Tuesday, September 25, 2012 at the University Mennonite Church, 1606 Norma St., State College with Pastor Marvin Friesen officiating. The family wishes to thank the staff of the Home Nursing Agency for their excellent support during hospice care. Online condolences and signing of the guest book may be entered at www.kochfuneralhome .com.
To send flowers to the family or plant a tree in memory of Suzanne Houts Moyer, please visit Tribute Store

A Memorial Tree was planted for Suzanne
We are deeply sorry for your loss ~ the staff at Koch Funeral Home
Join in honoring their life - plant a memorial tree
Services for Suzanne Houts Moyer
There are no events scheduled. You can still show your support by sending flowers directly to the family, or planting a memorial tree in memory of Suzanne Houts Moyer.
Visit the Tribute Store
Print
Share A Memory
Send Flowers
Plant a Tree