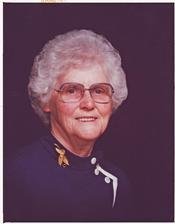 Charlotte E. Spencer, 89 of State College, PA, passed away on Wednesday, February 16, 2011 at The Terrace at Brookline. She was born in Syracuse, New York September 30, 1921, the daughter of the late Paul and Mae Hudson Donovan. On September 12, 1942, she married Glenn Sherman Spencer of Canton, PA, who passed away on November 30, 2003. She was a graduate of Syracuse Normal School. Although she completed more than three years of college as a young woman, she put her career on hold to concentrate on having a family. In 1960, she returned to complete her final semester at Buffalo State College, graduating with a B.S. in elementary education. She taught school, mostly second grade, for more than 20 years in the Horseheads, New York school system. Charlotte, a strong advocate of education, loved to read and often volunteered at her local library. She also enjoyed sewing and taught her daughters to sew. She and her family went camping every summer to World's End State Park, the Adirondacks, or other points of interest throughout the northeast and across the country. She was active in the Presbyterian Church, often serving as a leader in youth groups; she was an elder with the Presbyterian Church of Rock Stream, New York. She was also a Girl Scout leader, and frequent helper and fan for her children's concerts and sports events. Throughout much of the 70s and 80s, Charlotte and Glenn lived on Seneca Lake north of Watkins Glen, and Charlotte especially enjoyed swimming, canoeing, and collecting shells and beach glass with her grandchildren. Charlotte is survived by her four children; Patricia Spencer and husband, Tom Osborn, of New York City; Thomas Spencer and wife, Beryl, of Peterhead, Scotland; Margaret Young and husband, Jonathan, of Braintree, MA; and Janet Haner and husband, William, of State College. She was preceded in death by a brother, Allen F. Donovan and a sister, Pauline Holden. She is also survived by six grandchildren and five great-grandchildren. A memorial service will be held at 10:30 a.m. on Monday, February 21, 2011 at the Church of Christ-Disciples of Christ, 40 North Minnequa Avenue, Canton, PA. Memorial contributions may be made to the Horseheads Free Library, 405 South Main Street, Horseheads, NY 14845 or to the Alzheimer's Association, P.O. Box 96011, Washington, DC 20090.
To send flowers to the family or plant a tree in memory of Charlotte Spencer, please visit Tribute Store

A Memorial Tree was planted for Charlotte
We are deeply sorry for your loss ~ the staff at Koch Funeral Home
Join in honoring their life - plant a memorial tree
Services for Charlotte Spencer
There are no events scheduled. You can still show your support by sending flowers directly to the family, or planting a memorial tree in memory of Charlotte Spencer.
Visit the Tribute Store
Print
Share A Memory
Send Flowers
Plant a Tree