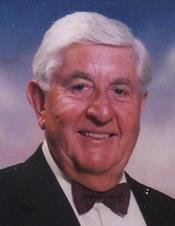 Leo J. Doriguzzi, 83, loving husband, father and grandfather went to meet his Lord on February 28, 2011. He was a resident of Marco Island, FL, and had a home in State College, PA. He was born on February 9, 1928 in Bradford, PA, the son of Cornelius and Lucy (Vecellio) Doriguzzi, who preceded him in death. He is survived by his loving wife of 56 years, Lois (Wamblade) Doriguzzi, daughter of the late K. Basil and Ellen (Turnwall) Wamblade of Kane, PA. Also surviving are his daughter, Tina Doriguzzi - Dangel and her husband Arthur John Dangel, Jr. and grandson Arthur John Dangel, III, all of State College, PA. He is also survived by a son, Dave A. Doriguzzi and his long-time companion Kim Rostron and her son Josh Rostron of Pittsburgh, PA. Also surviving are many nieces, nephews and their children. He was preceded in death by six sisters and one brother. He graduated from Bradford High School in 1946, joined the Army as a private and went to Japan. He learned to drive a tank and eventually became a Master Sergeant in logistics. When he returned stateside, he went to work for a loan company. He eventually became a banker at Lock Haven Trust and was promoted to Vice President. Lock Haven Trust became Central Counties Bank and eventually Mellon Bank. He was promoted to Senior Vice President and served on many American Bankers Association committees until his retirement in 1990. He loved to play baseball and golf and was a member of Centre Hills Country Club and Lock Haven Country Club, until his health declined. He loved to travel, visiting places such as Italy, London, France, Germany, Sweden, Switzerland, Norway, Mexico, Jamaica, Canada, and almost every state in the US, including Alaska and Hawaii. He was very active in civic affairs in both State College and Lock Haven. He worked diligently for the United Way, the Second Mile, the Jaycees, the Elks and the PSU Basketball Club, to name a few. He loved to watch football and basketball, especially PSU and the Steelers. He had PSU football tickets for 40 years and never missed a game. Visitation will be Sunday, March 6, 2011, from 1-4 p.m. at Koch Funeral Home, 2401 S. Atherton St. State College. A Funeral Service will be at the funeral home on Monday, March 7 at 1:00 p.m. with the Rev. P. Stevens Lynn officiating. Burial will be at the Centre County Memorial Park. In lieu of flowers, memorial contributions can be made to the Second Mile, 1402 South Atherton Street, State College, PA 16801, the United Way, 2790 W. College Avenue #7, State College, PA 16801 or Avow Hospice, 1095 Whippoorwill Lane, Naples, FL 34105.
To send flowers to the family or plant a tree in memory of Leo Doriguzzi, please visit Tribute Store

A Memorial Tree was planted for Leo
We are deeply sorry for your loss ~ the staff at Koch Funeral Home
Join in honoring their life - plant a memorial tree
Services for Leo Doriguzzi
There are no events scheduled. You can still show your support by sending flowers directly to the family, or planting a memorial tree in memory of Leo Doriguzzi.
Visit the Tribute Store
Print
Share A Memory
Send Flowers
Plant a Tree