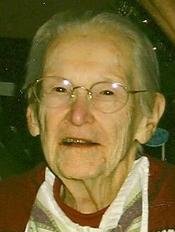 Virginia Turkington Lindsay, 97, of 301 Farmstead Lane, passed away Tuesday, March 1, at Mount Nittany Medical Center. She was born December 28, 1913 in Boston, Mass., the daughter of the late Everett and Maude (Chivers) Turkington of Medford, Mass. Virginia was a 1935 graduate of Tufts University with a degree in English Literature. On October 12, 1938 in Melrose, Mass., she married Robert W. Lindsay, who predeceased her on May 5, 1999. A homemaker, she moved to State College in 1943 with her husband, who had taken a faculty position at Penn State. When Virginia arrived in State College, she quickly became involved in the community as a volunteer. Early in her marriage as her children became involved in scouting, she became a Cub Scout and Brownie leader and later became a volunteer in the Girl Scout office. She was also active in the Christian Science Church and the League of Women Voters, serving on its board of directors. As a 40-year volunteer at the Schlow Library, she was instrumental in helping the library get its own building on West College Avenue. In addition to volunteering at the Library, she volunteered for a long time at the Hospital Snack Bar and at Saint Andrews Episcopal Church, where she and Robert were members. She also was among the first volunteers for the Centre County Homemakers, which later became Centre Home Health Care. Ginny and Bob loved to travel to see minor league baseball games and also were fans of Penn State Wrestling, following the team as members of the Penn State Wrestling Club. They also loved to travel to visit their grandchildren. She had many friends and was "Grandma" or "Aunt Virginia" to their children. She loved music and played the piano for relaxation. Cooking, doing needlework of all kinds, crossword and jigsaw puzzles were among her many interests along with swimming and watching ice skating on television. Ginny will be remembered mostly for her kindness and love of children. She never had a bad word to say about anyone and lit up when a child crossed her path. In addition to her husband and parents, she was predeceased by her brother, Robert, and her sisters-in-law, Jane and Grace Lindsay, and Marguerite Low and her husband, Curtis. She is survived by her children, Susan (John) Leisner of Pasadena Calif., Robert (Janice) Lindsay, Ann and Marti Lindsay all of State College. Also surviving are her beloved grandchildren, Robert C. Lindsay of Baltimore, Md., Rebecca J. Lindsay of Frederick, Md., Andrew (Deirdre) Leisner of Pebble Beach, Calif., and Jane (Andrew) Francis of EI Segundo, Calif., as well as great-grandchildren Christian, Emma and Sabrina Leisner, and John Robert (JR) and Wyatt Francis. A sister-in-law, Jean Turkington of New Hampshire survives as well as a niece, Laurel and nephews Kenneth and Steven. A memorial service will be held at 1 p.m. on Tuesday, May 31, 2011, at the Koch Funeral Home with the Rev. Richard Wall officiating. Burial will be in Centre County Memorial Park. In lieu of flowers, memorial contributions may be made to the Schlow Centre Region Library, 211 S. Allen Street, State College, PA 16801, or to the Mount Nittany Medical Center, 1800 E. Park Ave., State College, PA 16803. The family wants to express its thanks to the staff at Greenhills Village in State College who took such good care of Virginia in her last years.
To send flowers to the family or plant a tree in memory of Virginia Lindsay, please visit Tribute Store

A Memorial Tree was planted for Virginia
We are deeply sorry for your loss ~ the staff at Koch Funeral Home
Join in honoring their life - plant a memorial tree
Services for Virginia Lindsay
There are no events scheduled. You can still show your support by sending flowers directly to the family, or planting a memorial tree in memory of Virginia Lindsay.
Visit the Tribute Store
Print
Share A Memory
Send Flowers
Plant a Tree