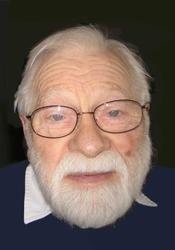 Daniel F. Yersevich, 86, died Sunday morning, March 6, in Boalsburg, PA, where he had resided with his daughter and son-in-law Kerry and John Warburton. Born July 29, 1924, in Freeland, PA, he was the son of the late Frank and Mary (Magarosky) Yersevich. He graduated from Freeland High School in 1942, before serving in the US Army during WWII. He was awarded a Purple Heart for injuries sustained during his service. In 1949, he graduated with honors from West Chester State Teachers College with a Bachelor of Education in Music Education. On August 29, 1949, he married Laura Frye who predeceased him. Dan was a beloved father, grandfather, brother, and friend. He had a passion for music and for horses, and he enjoyed both for 50 years at his farm in East Berlin, PA. He was employed as a systems analyst with Caterpillar Tractor of York, PA, for 30 years. In retirement, Dan enjoyed traveling the continent on his touring motorcycle. In 2006, with his health declining, Dan reluctantly left his farm to move near his daughter in Centre County. Dan is survived by his son Brett Daniel Yersevich of East Berlin, PA; his daughter and son-in-law Kerry E. and John C. Warburton of Boalsburg; and three grandchildren: Seth Christian Warburton (wife Bekah) of Ames, Iowa; Scott Cameron Warburton of Boulder, Colorado (fiancée Jessica Griese of Troy, Michigan); and Jillian Grace Warburton of Boalsburg. Dan is also survived by a sister Joan Hale (Robert O.) of Titusville, Florida, and his beloved companion of many years, Alma Saylor of York. The family wishes to express heartfelt thanks to those who provided loving care to Dan during his years in Centre County: the staff of The Inn at Brookline where Dan lived through 2009; the staff of The Fairways at Brookline where Dan resided periodically; the staff of Centre Homecare who assisted him at home; and medical professionals Dr. Charles Maxin, Dr. Michael Kiel, and Mark Lombardo and his nurses. A memorial service will be held at Calvary Baptist Church, 1250 University Drive, State College, PA, on Friday, March 18, at noon with Chad Oberholtzer presiding. Friends will be received at the church from 11:00 AM until the start of the service. In lieu of flowers, memorial contributions may be made to Centre Homecare, 2437 Commercial Boulevard, State College, PA, 16801, or to Centre LifeLink, 125 Puddintown Road, State College, PA, 16801.
To send flowers to the family or plant a tree in memory of Daniel Yersevich, please visit Tribute Store

A Memorial Tree was planted for Daniel
We are deeply sorry for your loss ~ the staff at Koch Funeral Home
Join in honoring their life - plant a memorial tree
Services for Daniel Yersevich
There are no events scheduled. You can still show your support by sending flowers directly to the family, or planting a memorial tree in memory of Daniel Yersevich.
Visit the Tribute Store
Print
Share A Memory
Send Flowers
Plant a Tree