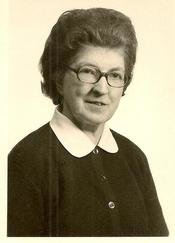 Sara Adams Krumrine, 94, of Tyrone, formerly of State College, died Monday, March 7, 2011, at Epworth Manor. Born March 25, 1916, in Tyrone, she was a daughter of the late Aaron Wesley Adams and Elsie Mae Harper Adams. On December 2, 1945, she married John Charles "Buffer" Krumrine, who died July 27, 1985. She is survived by three children, John Adams Krumrine and his wife, Leta, of Boone, N.C., Linda Rebecca Krumrine Lander and her husband, Stephen of Fairfax Station, VA, and Donna Mae Krumrine Stephenson and her husband, Richard, of Horseheads, N.Y.; eight grandchildren, Daniel Thomas Stephenson, his wife, Amy, and their children Avery Claire and Jack Trevor, of San Jose, Calif., Brian Richard Stephenson and his significant other, Erica Brooks, of San Diego,Calif. , Jennifer Lynn Stephenson Campanella her husband, Daniel, and their children Katelyn Christina, Coleman Scott, and Gable Blake, of Ft. Lauderdale, Fl., Nathan Lander and his fiancee, Monica Jaramillo, of New York, N.Y., Timothy Lander of Norfolk, Va., Andrew Lander and his wife, Amanda, of Fairfax Station, Va., John Michael Krumrine, his wife Kenna, and their children Lawson and Vanessa of Boone, NC., and Catherine Krumrine (USAF-currently in Kuiat) and her husband, Adam Mayberry, of Colorado Springs, Colo. Along with her parents and husband, she was predeceased by her sister, Pauline A. Wolf Albright in July, 2009. Sara was a 1934 graduate of Tyrone High School and a 1937 graduate of the Philipsburg Hospital School of Nursing. She was a surgical nurse at Bellefonte Hospital from 1937 to 1946, the first executive director of Centre County Homemaker Service (now Centre Home Care) from 1965 to 1970, and worked for State College Borough's Parks and Recreation Department as the Coordinator of the Senior Citizen's Club from 1970 to 2000. She was also an office nurse for Dr. H. Richard Ishler and Dr. H. Thompson Dale. She was a former member of St. Paul's United Methodist Church, the State College Free Methodist Church and a member of the Coyler Brethren in Christ Church. She was a founding member of the Berean Baptist Church of State College. Sara was a Girl Scout Leader and Director and Nurse Consultant at the Tussey Ridge Girl Scout Day Camp. She served as Camp Nurse at the Free Methodist Church Camp in Lamar for many years. She was a driver for State College Meals on Wheels. She was a member of the Altrusa Club of Centre County, serving as president from 1972 to 1974 and district governor for two terms, a 30-year member of the Graduate Nurses Study Club, a member of State College YMCA, the YMCA Federation of Retired Persons Club of Pennsylvania, serving as president in 1989, The Federation of Retired Persons Club, serving as president in 1980, 1990 and 1991. She also served as a Red Cross Blood Mobile volunteer and served on the State College Borough Safety and Health Board. Sara collected and maintained scrapbooks on the history of Centre Community Hospital from the 1930's through the 1990's. Friends will be received from 10 to 11 a.m. on Thursday, March 10, 2011, at Koch Funeral Home, 2401 S. Atherton St., State College. Funeral service will follow at 11 a.m. at the funeral home with the Reverend Mark Liller, current Epworth chaplain, and Joan Smith, former Epworth chaplain, officiating. Burial will be in Pine Hall Cemetery. Memorial contributions may be made to the Coyler Brethren in Christ Church, Centre Hall, PA 16828 or to Epworth Manor, 951 Washington Ave., Tyrone, PA 16686.
To send flowers to the family or plant a tree in memory of Sara Krumrine, please visit Tribute Store

A Memorial Tree was planted for Sara
We are deeply sorry for your loss ~ the staff at Koch Funeral Home
Join in honoring their life - plant a memorial tree
Services for Sara Krumrine
There are no events scheduled. You can still show your support by sending flowers directly to the family, or planting a memorial tree in memory of Sara Krumrine.
Visit the Tribute Store
Print
Share A Memory
Send Flowers
Plant a Tree