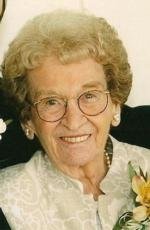 Nancy C. Addison, 93, of State College, died Thursday, November 25, 2010, at Brookline. She was born in Lewisburg, W.Va., on August 1, 1917, the daughter of Dr. Clifton S. and Eunice N. Coffman. Mrs. Addison attended Greenbrier College for Women from 1935 to 1936, and graduated from West Virginia University in 1939 with a bachelor's degree in business and economics. On December 30, 1939 she married Arnold Addison, a fellow West Virginia University graduate. They came to State College in 1948. In 1978 she became First Lady of State College when Arnold was elected mayor, an office he held until 1994. Surviving are three daughters and their husbands, Carol A. and John C. McKeever, Judith A. and James M. Rayback, and Gail A. and Daniel B. Guss. She had seven grandchildren—Colleen M. Sheehan and John McKeever, Shelly A. Rayback and Brian M. Rayback, and Nathan C. Guss, Sarah G. Barnabas, and Jonathan J. Guss, and six great-grandchildren. Also surviving is her nephew Charles Addison Coffman of Santa Fe, New Mexico. Preceding her in death were her husband on June 27, 2000 and a brother in February 2010. From 1964 to 1974 Mrs. Addison was the managing editor of The Child Development Abstracts and Bibliography Journal, a publication of the Society of Child Development. An active member of the community, Mrs. Addison served on the boards of directors of the American Association of University Women, the Faculty Women's Club, and the Voluntary Action Center, where she was co-chairman of the Telephone Reassurance program. In 1998 she was named Volunteer of the Year by the Voluntary Action Center. She also volunteered at the Mount Nittany Medical Center and the American Red Cross. As a member of St. Andrew's Episcopal Church, Mrs. Addison served on the Vestry, the Board of the Women of St. Andrew's, and as a volunteer in the church gift shop. A memorial service will be held Monday, November 29, 2010 at 9:30 A.M. at St. Andrew's Episcopal Church, State College, with Father Richard Wall officiating. Friends will be received at the church following to the service. In lieu of flowers, memorial contributions may be made to Volunteers in Medicine, P.O. Box 10365, State College, PA 16805 or to the Centre County Community Foundation, 2601 Gateway Drive, State College, PA 16801.
To send flowers to the family or plant a tree in memory of Nancy Addison, please visit Tribute Store
Services for Nancy Addison
There are no events scheduled. You can still show your support by sending flowers directly to the family, or planting a memorial tree in memory of Nancy Addison.
Visit the Tribute Store
Print
Share A Memory
Send Flowers