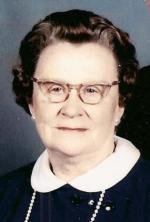 Frances Louise Bell died peacefully on December 10, 2010 in State College, Pa. A resident of Brookline, a member of the community at Pinecastle and at The Fairways, she moved to Pennsylvania in 2004 from Williamsburg, Va. where she had lived for more than 30 years. Born in Johnstown, Pa., on November 8, 1916, the daughter of Virgil and Emma Tomb, she was an accomplished musician and organist at the Franklin Street Methodist Church. She graduated from Conemaugh Valley Memorial Hospital's School of Nursing where she worked for several years as an Operating Room Supervisor. It was there that she met the love of her life who would be her husband for more than 50 years, Gordon Dale Bell, M.D., who predeceased her. She and her husband moved to Kingston, Pennsylvania in 1946 where they lived until 1973. She is survived by two daughters: Maggie Crispell (Mrs. Loren N. Crispell) of Boalsburg, Pennsylvania; and Linda Carney Hollin, (Mrs. Ulrich Hollin) of Clark Crescent, Ontario, Canada; and, two brothers, Donald Tomb, of Johnstown, Pennsylvania, and Kenneth Tomb, of Chandler, Arizona. She greatly enjoyed being grandmother to Molly Crispell, Wyncote, Pa., and Loren N. Crispell, III, State College, Pa. the children of Maggie and Loren Crispell. Other grandchildren are Lee and Jeff Carney, of Vancouver, Canada, and Alaska, the children of Linda and Alan Carney, and Jason and Marc Hollin, of Canada, the stepchildren of Linda Carney Hollin. An energetic and dedicated community volunteer and leader for much of her life, she served in numerous community activities including: The Luzerne County Medical Auxiliary, The United Way of Luzerne County, The American Red Cross, Retarded Citizens of Luzerne County, and at The First Presbyterian Church of Wilkes-Barre, Pa., where she served as a member of the choir, Christian Education Director and as a Deacon. A talented pianist, she and her husband shared a love of music throughout their lives including service as members of choirs at the churches they belonged to and to significant involvement in musical theatre. In Williamsburg, Va., her volunteer service continued at Bruton Parish Church, membership in Daughters of the King, Williamsburg Community Hospital Auxiliary and Hospice of Williamsburg, Va. While in State College, Pa., she was greatly supported and nourished by her membership at St. Andrews Episcopal Church. Memorial gifts may be made, in her honor and memory, to St. Andrews, 208 West Foster Avenue, State College, Pennsylvania 16801-4822. Graveside services will be held at Williamsburg Memorial Park at noon on Monday, December 13, 2010. A gracious and humble individual, she will be sweetly remembered and missed by those who knew her. Appreciation is extended to the staff and residents of Pinecastle and The Fairways at Brookline, and to the Hospice Services Staff of Home Nursing Agency who provided dedicated care, touching friendship, and happy memories during her years in Centre County.
To send flowers to the family or plant a tree in memory of Frances Bell, please visit Tribute Store
Services for Frances Bell
There are no events scheduled. You can still show your support by sending flowers directly to the family, or planting a memorial tree in memory of Frances Bell.
Visit the Tribute Store
Print
Share A Memory
Send Flowers