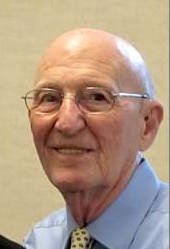 William “Bill” D. Moir, 84, of State College, died Wednesday, April 22, 2015, at his residence. Born November 30, 1930 in Leechburg, PA. he was the son of the late Robert and Katherine Winning Donn Moir. He married Rose G. Recchia, on September 3, 1955, who survives at home. He is survived by six children, Robert Moir and his wife, Kathy, of State College, William A. Moir and his wife, Becky, of Frederick, MD, Andrew Moir and his wife, Lisa, of State College, Laura A. Moir and her partner, Deanna, of Lancaster, Louise M. Newswanger and her husband, Jeff, of New Holland, Mark E. Moir and his spouse, Domingo Pinero of New York, NY, sixteen grandchildren, Kirstie, Bill, Katie, Lisa, Abby; Robert, Liz, Alex; Stacy, Matthew; Laura, Maria, Monica; Tori, Carl, Dylan and twelve great grandchildren. Bill was a 1948 graduate of Leechburg Area High School. He served in the United States Navy from 1948 to 1952. He received a Bachelor of Business from Penn State University in 1957. He retired in December 1991 as a Director of Sponsored Programs from Penn State University after thirty seven years of service. Bill was a member of Our Lady of Victory Catholic Church in State College. He was also a member of the Burning Tee Golf League and the American Legion. Visitation will be 5-8 p.m. on Friday, April 24, 2015 at Koch Funeral Home, 2401 S. Atherton Street, State College. Funeral mass will be held at 10:30 a.m. on Saturday, April 25, 2015 at Our Lady of Victory Catholic Church, 820 Westerly Parkway, State College with the Reverend Neil Dadey officiating. Burial will be in Centre County Memorial Park, State College. Memorial contributions may be directed to Our Lady of Victory School. Arrangements are under the care of Koch Funeral Home, State College, PA Online condolences and signing of the guest book may be entered at www.kochfuneralhome.com or visit us on Facebook.
To send flowers to the family or plant a tree in memory of William Moir, please visit Tribute Store
Friday
24
April