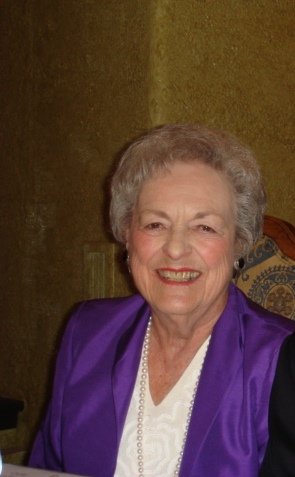 Mary Elizabeth Follmer LaCroix, of State College, died Tuesday, April 28, 2015 at Juniper Village at Brookline in State College. She was born May 27, 1923 in Milton, Pa., the daughter of the late U.S. Federal District Court Judge Frederick V. Follmer and his wife Ella Brown Follmer. On September 8, 1951, in Milton, she married Robert Edward LaCroix, a graduate of Cornell University and former officer and fighter pilot of the U.S. Air Force, serving in the Pacific Theater during World War II and later becoming a corporate executive with the Westinghouse Electric Company. He died in 2002. She was a 1941 graduate of Milton High School, a 1945 graduate of Bucknell University and a 1946 graduate of Columbia University’s Teachers College, New York City. Prior to her marriage, Mrs. LaCroix was a director of Teenage Club Programs for the YWCA in Westfield, N.J. and then Dean of Freshmen Women of Penn State University at Swarthmore and Ogontz campuses. During college at Bucknell, she was a member of Mortar Board Senior Honor House, Junior Counselor, Pi Beta Phi Sorority and Mu Phi Epsilon (music honorary), and was always very active in the musical arts. Before moving to State College, Bob and Mary’s home was in Monroeville, where she had an active role in St. Martin’s Episcopal Church, also presenting a series on Christian Family Living programs for the diocese of Pittsburgh, Pa. She also headed up a Junior High program for the community of Monroeville, and is a member of the PEO Sisterhood, an organization that helps women further their education. In State College, she and her husband were members of St. Andrew’s Episcopal Church, where she was a former Choir Member and active in Bible studies. Surviving are two sons, Frederick Edward LaCroix of Manila, and his wife Kristine, Robert Arthur LaCroix of San Diego, Calif. and his wife Molly, one daughter Maryann Lindberg of Swanzey, N.H., and her husband Robert, and four grandchildren. A memorial service will be held at St Andrew Episcopal Church, 208 West Foster Ave, State College, on Saturday, May 16, 2015 at 10 a.m. with the Reverend Richard Wall officiating. A private graveside service will be conducted at Harmony Cemetery, Milton. In lieu of flowers, contributions may be made to St. Andrew’s Episcopal Church Memorial Fund at 208 West Foster Ave., State College, PA 16801. Arrangements are under the direction of Koch Funeral Home, online condolences and signing of the guestbook may be entered at www.kochfuneralhome.com.
To send flowers to the family or plant a tree in memory of Mary LaCroix, please visit Tribute Store
Saturday
16
May