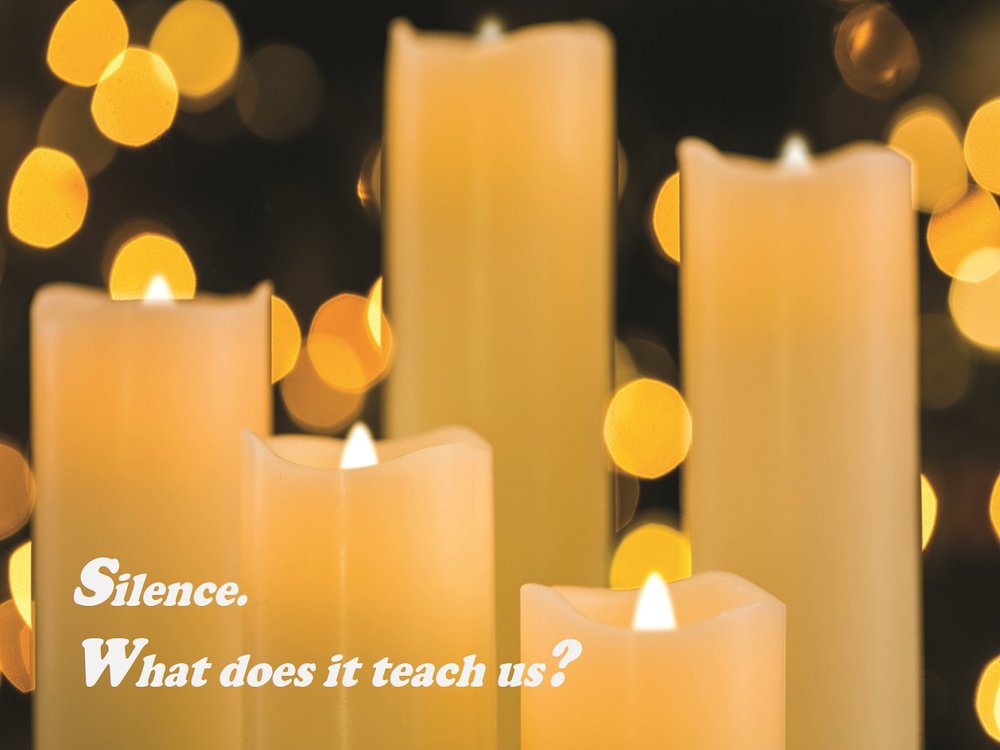 Our theme for December is Silence. What Does It Teach Us? I recently wrote an article about this for the 2017 Fall Issue of Centered magazine. I will share it with you here over the next couple of weeks:

When I go on a retreat, I make sure I spend part of it in silence. Something as simple as greeting another person becomes a whole new experience. Instead of a head full of thoughts about what to say and how to respond, you simply look at the others and smile. Without the distraction of words, you are given the opportunity to really look them in the eyes and they you. In the silence the connections become even stronger. I remember feeling so much compassion for these “strangers.”

After the 24 hours of silence — eating together, walking together, passing one another in the hallways, etc., all in silence — our first opportunity to speak was at dinner together. I sat with someone who had just arrived. When she learned that I was from State College, the conversation eventually turned to the local happenings that had gained worldwide attention. Moving from the peace of the silence to the ugliness of those events, my body began to shake. In the past I had similar conversations many times, but never immediately after coming off the depths of inner silence, and the physical manifestation was startling to me.

This month our theme is “Inner Stillness” For me, inner stillness is about contemplation. It’s about taking some deep breaths and going to the innermost part of me. It’s about letting go of thought...

I think this “Talking to Grief” poem by Denise Levertov does a great job speaking about making grief your friend: TALKING TO GRIEF Ah, grief, I should not treat you like a homeless dog who comes ...

Thanksgiving is this week. If you’re grieving the loss of a loved one, you might have mixed emotions about taking part in the festivities. I encourage you to create space for grief to be your frien...

Thinking of our theme, “Is Grief Your Friend or Your Enemy?” I appreciate this quote by author C. S. Lewis when he was writing about the death of his wife, “And suddenly at the very moment when, so...

This month our theme is “Is Grief Your Friend or Your Enemy?” I think for many of us grief feels like both -- it just depends on the moment. Initially when we’ve lost a loved one, grief may feel li...

As we close out this month and its theme of “Harvesting Your Thoughts.” I want to share the David Whyte poem, “Start Close In.” While on the grief journey with its many thoughts and emotions, it ca...

A third strategy to help us believe that we can handle the difficult emotions of grief is spending time in nature. This is one of my favorites. I’m continually surprised by the profound effects nat...

A second strategy to help us believe that we can handle the difficult emotions of grief is expressive writing. Journaling is often recommended for grievers. Moving our thoughts and emotions from th...

As we continue our discussion of “Harvesting Your Thoughts,” we will talk about strategies to helps us believe that we can handle the difficult emotions of grief. One is the practice of mindfulness...

This month our theme is “Harvesting Your Thoughts.” When we’re grieving the loss of a loved one, we have many thoughts and emotions. What we may not recognize is that the two are connected. Our tho...