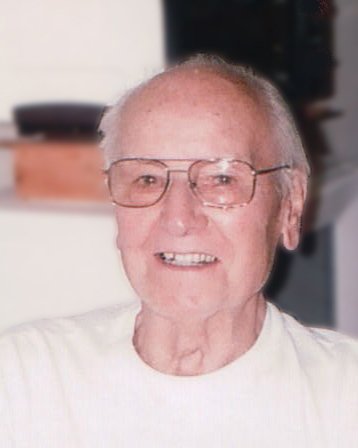 Harold R. Wausat, 97, of Pine Grove Mills, died peacefully at his home on Saturday, August 29, 2015. Born in Pittsburgh on November 24, 1917, he was the son of the late Michael J. and Amelia "Mollie" Korfonta Wausat. On February 7, 1948, he married Helen Over, who preceded him in death on January 26, 2011. Hal is survived by two daughters, Laura A. Wausat and husband, Michael Sencindiver, of Riverton, NJ, and Leona K. Wausat of Pine Grove Mills; and three grandchildren, Sarah, Andrew, and Benjamin Sencindiver, all of Riverton, NJ. In addition to his wife, Helen, Hal was preceded in death by his eight siblings. Hal graduated from Allegheny High School, in Pittsburgh in 1937, and later attended Duquesne University. In 1941 he joined the United States Army, where he served until 1945. During his service he was stationed in West Africa and Italy, serving as quartermaster supply technician for the Brigade Surgeon's Section. He left the army at the rank of Technical Sergeant, and was awarded the Good Conduct Medal, American Defense Service Medal, and European African Middle Eastern Service Medal, with 1 Silver Service Star and 2 Bronze Service Stars. After the war, Hal attended Penn State University, earning his BS in 1949. He later returned to Penn State to earn his Masters in Education in 1958. He worked as a teacher of Math, and later of Earth and Space Science at Westerly Parkway Junior High School in State College Area School District. During his teaching years, he also served as JV basketball coach, and was Varsity Head Football coach from 1964-1968. In addition, he worked as a basketball referee, officiating high school basketball games across the state. Hal retired from teaching in 1980, after 28 years of service. After retirement he continued to work as a draftsman for the Penn State University Applied Research Laboratory, where he had worked during the summers since 1962. After his retirement, Hal became a dedicated daily swimmer, and an enthusiastic gardener. He was an accomplished fly fisherman, and enjoyed tying his own flies. He was a member of State College Area Teachers Association, the PSEA, NEA, the Pennsylvania Interscholastic Athletic Association, the International Association of Approved Basketball Officials, and was a member of Sigma Pi fraternity at Penn State. Visitation will be 4:00p.m. to 7:00p.m. on Thursday, September 3, 2015 at Koch Funeral Home, 2401 S. Atherton Street, State College. Funeral mass will be held at 10:30a.m. on Friday, September 4, 2015 at Our Lady of Victory Catholic Church, 820 Westerly Parkway, State College, with the Reverend Val Bradley officiating. Burial will be in Centre County Memorial Park, State College. Memorial contributions, in lieu of flowers, may be directed to the Mowad Endowment for New Discoveries (Urology-MEND), at the Geisinger Health System Foundation donate.geisinger.org. Arrangements are under the care of Koch Funeral Home, State College. Online condolences and signing of the guest book may be entered at www.kochfuneralhome.com or visit us on Facebook.
To send flowers to the family or plant a tree in memory of Harold Wausat, please visit Tribute Store
Thursday
3
September

Share Your Memory of
Harold
Upload Your Memory View All Memories
Be the first to upload a memory!
Share A Memory
Send Flowers
Plant a Tree