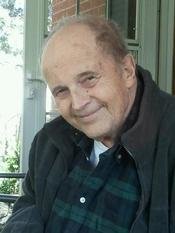 Ned Minshall, 83, of State College passed away on May 29, 2011, at home. He was born February 11, 1928, in State College, a son of the late Robert E. and Nina Shuey Minshall. On October 4, 1952, he married Anne M. Kleiner, who survives at home. He is also survived by his five children, Susan Braun (Günter) of Bietigheim-Bissingen, Germany; Nancy Sabol (Bill) of Port Matilda; Maggie Smith (Grant Meyers) of State College; Edward E. Jr., of Bellefonte; and William F., of Bellefonte. In addition he is survived by seven grandchildren, who loved calling him PeePaw. They are Andreas and Christian Braun (Nicole); Michael, Elizabeth (Ian Groetsch), and Patrick Sabol; and Brian (Nicole) and Katherine Smith. He is also survived by four great-grandchildren: Bradley, Brandon, Connor, and Kenna Smith. He was preceded in death by a brother, William, and is survived by a sister, Virginia Swartz, of Mill City, along with numerous nieces and nephews. Ned was a 1946 graduate of State College High School, and served in US Army, in the 351st Infantry Regiment in the occupation forces in Trieste, Italy, in the aftermath of World War II. He was awarded the World War II Victory and Occupation medals, and received an honorable discharge. He attended Penn State after his discharge, and received a degree in print journalism in 1952. Following his graduation, he began his career in journalism, as the sports editor and chief editor of several small newspapers in western Pennsylvania. He joined the staff at Penn State Continuing Education in 1956, and retired in 1986 as head of publications and public relations for that department. Ned was a founding member of the Con-Ed all-star softball team. He enjoyed the many friendships he made playing softball, including John Andrews, who remained a good friend for the rest of Ned's life. He was an avid fly fisherman, and enjoyed spending time with five generations of his family at his cabin along Penn's Creek, which was built by his father in 1936. He always had a soft spot for dogs, and enjoyed the companionship of several really good dogs during his lifetime. An informal memorial service will be held at 10 a.m. Saturday, June 4, at the Eisenhower Chapel on the Penn State campus. A private memorial service with military honors will be held for the family and close friends. In lieu of flowers, memorial contributions may be made to the Pennsylvania SPCA, or the veteran's service organization of your choice. The family would like to thank the caregivers who helped during his illness, especially Vicki Bloom and Jessica Green.
To send flowers to the family or plant a tree in memory of Edward Minshall, please visit Tribute Store

A Memorial Tree was planted for Edward
We are deeply sorry for your loss ~ the staff at Koch Funeral Home
Join in honoring their life - plant a memorial tree
Services for Edward Minshall
There are no events scheduled. You can still show your support by sending flowers directly to the family, or planting a memorial tree in memory of Edward Minshall.
Visit the Tribute Store
Print
Share A Memory
Send Flowers
Plant a Tree