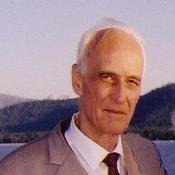 Dr Gerhard R. Barsch, June 22, 1927- July 10, 2011 Dr Gerhard R Barsch, 84, entered peacefully into rest on Sunday, July 10, 2011 at the Mount Nittany Medical Center in State College, Pa. He was a highly respected scientist, beloved husband, father, grandfather and friend, lover of nature, the arts and theatre, theologian and puppeteer. Born on June 22, 1927, in Berlin, Germany, he was the only child of the late Richard and Charlotte Barsch. He is survived by his wife Gertrud, who resides in State College, Pa, three daughters, Miriam Brueggeman and her husband Darryl of Fallbrook, Ca, Iris Marshall and her husband David of Cameron Park, Ca, and Rebekka Fox of Rocklin, Ca, one son Roman Barsch of Dietzenbach, Germany, and one stepson Reinhard Teetor of Pine Plains, NY. He is also survived by 7 grandchildren, Sophia, Charlotte and Kassandra Fox, Stefan and Catherine Marshall, and Aiden and Alexandra Teetor. Dr Barsch received a Masters of Science in Experimental Physics from the Technical University of Berlin, Germany, in 1951, and a Ph.D. in Theoretical Solid State Physics from the University of Gottingen, Germany, in 1955. From 1951 to 1952, he came to the Pennsylvania State University as an exchange student and Research Associate, during which time he fell in love with the natural beauty of Pennsylvania. From 1956 to 1962 he was a scientific staff member of the Battelle Memorial Institute, Frankfurt/Main, where he was engaged in semiconductor research and development. In 1962 he was offered a position at The Pennsylvania State University as a Senior Research Associate in Applied Physics. He became a founding member of the Materials Research Laboratory at the request of Professor Rustum Roy, who became his dear friend and colleague. He was made a Professor of Physics at Penn State in 1970, was a visiting fellow at Cornell University from 1981 to 1982 and served as a Consultant to the Los Alamos National Laboratory from 1990 until 1995. He retired from the Penn State faculty in 1992 as an Emeritus Professor, but continued to be engaged in his research work for many years. As a theoretical condensed matter physicist, his research interests span several fields, including lattice dynamics, high pressure physics, martensitic phase transitions, and nonlinear elasticity. He was one of the pioneers of using soliton theory to describe domain walls and anti-phase boundaries in ferroelastic systems. Dr. Barsch was a fellow of the American Physical Society, and a member of the American Geophysical Union, the Deutsche Physikalische Gesellschaft, and Sigma Xi. Dr Barsch had an unbending faith in the Lord, a love of music (particularly playing the recorder), the arts, philosophy, nature, photography, and travel. He enjoyed hiking/mountain climbing immensely, and had an intense love of the mountains, where he would retreat several times a year for spiritual and physical rejuvenation. He sought to understand the relationship between religion and science, and as a young man had even considered a career as a minister. He and his first wife, Sieglinde, were original members of the now retired interdenominational Ecumenical Sycamore Community. He and his wife are members of the Faith United Church of Christ in State College, Pa. ¬¬¬¬ Dr Barsch was concerned with Social Justice, Peace, and Ecology. He loved the theatre and was an accomplished puppeteer, performing puppet shows in downtown State College when his children were young, and was an artist as well, having hand carved many of his own puppets. He was a remarkably well-rounded individual, with an astounding memory and a talent for quoting fine literature, scripture, and poetry. Dr Barsch was a dedicated and disciplined man who lived by his motto, "Resting Means Rusting", and he often liked to quote his good friend, the late Reverend D.W. Carruthers, who said "Memories are the only paradise from which we can never be expelled". He will be dearly missed by his family, friends, and community. Memorial services will be held Tuesday, July 19, 2011 at 11:00 a.m .at Faith United Church of Christ, 300 East College Avenue, State College, Pa. A reception for friends, family and colleagues will be held at Foxdale Village, 500 E. Marylyn Ave., State College, PA from 6-8 pm on Tuesday, July 19, 2011. Arrangements are under the care of Koch Funeral Home, State College. Online condolences may be made at www.kochfuneralhome.com.
To send flowers to the family or plant a tree in memory of Gerhard Barsch, please visit Tribute Store
Services for Gerhard Barsch
There are no events scheduled. You can still show your support by sending flowers directly to the family, or planting a memorial tree in memory of Gerhard Barsch.
Visit the Tribute Store
Print
Share A Memory
Send Flowers