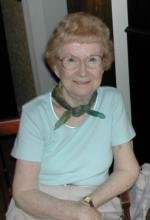 Mary Lou Horlacher, a long-term resident of State College, died Monday in Centre Hall at the age of 89. Born January 18, 1921 in State College, she was the daughter of Martin and Mary Lisse. Her father was a Penn State professor of agricultural biochemistry. Her only sibling, Miriam Lisse Arnold of Okemos, Michigan, preceded her in death. She was married to Martin R. Horlacher on June 9, 1941, and he passed away on December 23, 1978. She is survived by two sons and their wives--Robert and Diane Horlacher of Mount Gretna and William and Kathryn Horlacher of Austin, Texas. She is also survived by five grandchildren—Maureen Chritzman of Annville; Craig Horlacher of Lebanon; Matthew Horlacher of Dayton, Ohio; Benjamin Horlacher of Colorado Springs, Colorado; and Stephen Horlacher of Austin, Texas. One great-grandchild, Alannah Horlacher of Lebanon, also survives. Mrs. Horlacher was a 1938 graduate of State College High School, and she also attended Penn State. After her husband's death, she worked for Penn State as a part-time assistant in the Engineering Library. She was a lifelong member of Grace Lutheran Church, State College. She was known for her involvement in church and community activities, such as Easter Seals and Meals on Wheels. A memorial service will be held at Koch Funeral Home, 2401 S. Atherton St., State College on Saturday, January 8 at 11 a.m. with Rev. P. Stevens Lynn officiating. Friends will be received prior to the service, beginning at 10 a.m. Burial will be in Centre County Memorial Park. Memorial contributions may be made to State College Meals on Wheels, P.O. Box 1235, State College, PA 16804.
To send flowers to the family or plant a tree in memory of Mary Horlacher, please visit Tribute Store
Services for Mary Horlacher
There are no events scheduled. You can still show your support by sending flowers directly to the family, or planting a memorial tree in memory of Mary Horlacher.
Visit the Tribute Store
Print
Share A Memory
Send Flowers