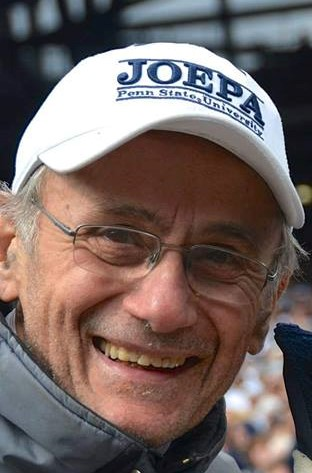 George R. Kleban, a well-known and popular State College dentist, died peacefully at home April 28, 2019, at the age of 81, surrounded by his family. “Doc” Kleban was a downtown State College fixture, having practiced at 212 South Allen street office for 53 years.  Until his retirement in March, 2017, Doc could be spotted downtown daily, at lunch with his wife, Betty; conferring with his son, George, whose dental laboratory was across the hall from his offices for more than 30 years, rushing to a grandchild’s athletic event and squeezing in dozens of tasks enroute.

George was born July 27, 1937, to Helen and George Kleban, who preceded him in death. Except for a few years in Michigan, he and his brother, Thomas, lived on their family’s Johnstown, Pennsylvania, farm, which Tom still maintains today.

George graduated from Richland High School in 1955, where he held numerous track and field records in hurdles and sprinting. He was one of the fastest runners in the region, qualifying for the Pennsylvania State Track and Field Championships, held at Penn State’s cinder track then located beside Rec Hall. This fortuitous visit to State College would foreshadow his purchase of a dental practice after earning his undergraduate, and dental, degrees from the University of Pittsburgh.

Dr. Kleban was a long-time member of the Centre County Dental Society, responsible for securing continuing education speakers for State College dentists. He traveled to perform dental work in the Amish community, for whom he held a great, lifelong affection.

A member of Our Lady of Victory parish from its original Garner Street days, Dr. Kleban was honored to be a member of Our Lady of Victory’s Knights of Columbus, Council 4678.  He supported State High and Penn State athletics, an avid Penn State football fan and season ticket-holder since 1965.  The next year, he began a tradition of Beaver Stadium tailgating that was, in a word, iconic, with generations of friends, family and fans enjoying food, fun and a shot of his secret “vitetose--” a type of hot toddy--for 52 years. Doc loved Penn State wrestling, and he and his family devotedly followed Penn State track and field, where their sons, Rick and Tom, were standouts in decathlon and pole vault.  An avid golfer, Doc shot a hole-in-one on Toftrees’ hole number 10. He was also a member of the Elks, BPOE 1600.  He loved to hunt and fish, and especially enjoyed spending time at his Rothrock State Forest hunting cabin and taking rides through mountain roads with his wife.

The entire Kleban family is so grateful for the help of Rebecca Bascomb, MD, MPH, and Kim Hitz, RN, of Hershey Medical Center Pulmonary Medicine, and thankful for the kind care shown to Dr. Kleban and his family by Omni and UPMC.

In lieu of flowers, please send donations in memory of Dr. George Kleban to the Pulmonary Fibrosis Program, Penn State Health Milton S. Hershey Medical Center Office of University Development, Attn: Tammi Garner, P.O. Box 852, Hershey, PA 17033.  Please include a note for where specifically you want the funds allocated to (Pulmonary Fibrosis Program) along with Dr. Kleban’s name if you’d like this to be a memorial gift.

Burial will be at Boalsburg Cemetery.

Arrangements are under the care of Koch Funeral Home, . Online condolences and signing of the guest book may be entered at www.kochfuneralhome.com.

To send flowers to the family or plant a tree in memory of Dr. George Kleban, please visit Tribute Store
Thursday
2
May

Share Your Memory of
Dr. George
Upload Your Memory View All Memories
Be the first to upload a memory!
Share A Memory
Send Flowers