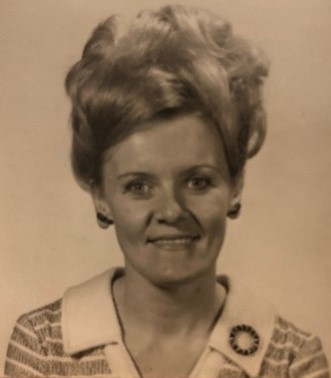 Claudette J Gagnon, 79, died peacefully on Sunday June 23 at her home in State College, following a brief battle with cancer. She was born in Coaticook Canada on October 12, 1939 to the late Leopold and Corinne Laroche. While in Canada, she worked for the C.P.A. firm, Giles Landry & Co. In 1964, she moved to Manchester, NH where she met and married Robert Gagnon on September 21, 1968. She gained her citizenship in 1969. On December 16, 1970, they became the proud parents of Michael Christian. In 1988, Claudette relocated to the State College area where she began working for The Bakery in sales, bookkeeping, and outstanding public relations. In 1991 she began working in housing for PSU, retiring in December 2000.

Claudette was an active member of NAMI (National Alliance for the Mentally Ill) for many years, attending local and national conferences in an effort for law enforcement to adopt life preserving measures when handling calls concerning mental illness. She was a member of St Peter's United Church of Christ.

Claudette was very social, loved and admired by many. She was an exceptional hostess. She enjoyed shopping, reading, daily walking, and attending concerts and plays with her friends. She looked forward to spending holidays and special events with her "American family."

In lieu of flowers, memorial contributions may be made to NAMI (National Alliance of Mentally Ill), 2107 Wilson Blvd, Suite 300, Arlington VA, 22201.

The public is invited to attend the graveside service on Monday, July 1 at the Boalsburg Cemetery at 11:30 a.m.

To send flowers to the family or plant a tree in memory of Claudette Gagnon, please visit Tribute Store
Monday
1
July

Share Your Memory of
Claudette
Upload Your Memory View All Memories
Be the first to upload a memory!
Share A Memory
Send Flowers