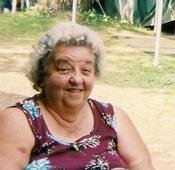 Alice D. Shuey, 83, of State College, died Tuesday, October 18, 2011, at Centre Crest Nursing Home. Born July 23, 1928, in State College, she was the daughter of the late William K. and Verna Nearhood Dunkel. She married James I. Shuey Sr. on June 4, 1949 who preceded her in death on November 27, 1984 as well as a son James I Shuey Jr. in 1978 and a brother William Dunkel in 1972. She is survived by three children, Catherine Myers, of Centre Hall, Tina Shuey, of State College, William Shuey and his wife, Lynda, of State College, eight grandchildren; Ray Myers Jr. and his wife, Jennifer, Matt Myers, James I. Shuey III and his wife, Bobbie, Michael Shuey, Jamie Cunningham and her husband, Nathan, William Shuey Jr. and his wife, Shannon, Alicia Musheno and her husband, Jonathan, Tyler McClellan and his fiancé, Brittnee Flowers and twelve great grandchildren. Alice was a 1946 graduate of State College Area High School. She was employed by C-Cor and Erie Tech where she worked as a quality control inspector. She belonged to the Faith United Church of Christ in State College. She was a member of the Rebekah Lodge and the American Legion Women's Auxiliary Post 245 in State College. She attended the Grange Fair for eighty-two years of her life and was an avid Pittsburgh Pirates fan. Visitation will be from 6:00 to 8:00 p.m. on Monday, October 24, 2011 at Koch Funeral Home, 2401 S. Atherton St., State College. A Funeral Service will be held at 11:00 a.m. on Tuesday, October 25, 2011 at the funeral home with the Rev. Jack Palmer officiating. Burial will be in Pine Hall Cemetery. Memorial Contributions may be made to Centre Home Care at 2437 East College Avenue, Suite 6, State College, PA 16801 Arrangements are under the care of Koch Funeral Home, State College. Online condolences may be made at www.kochfuneralhome.com.
To send flowers to the family or plant a tree in memory of Alice Shuey, please visit Tribute Store

A Memorial Tree was planted for Alice
We are deeply sorry for your loss ~ the staff at Koch Funeral Home
Join in honoring their life - plant a memorial tree
Services for Alice Shuey
There are no events scheduled. You can still show your support by sending flowers directly to the family, or planting a memorial tree in memory of Alice Shuey.
Visit the Tribute Store
Print
Share A Memory
Send Flowers
Plant a Tree