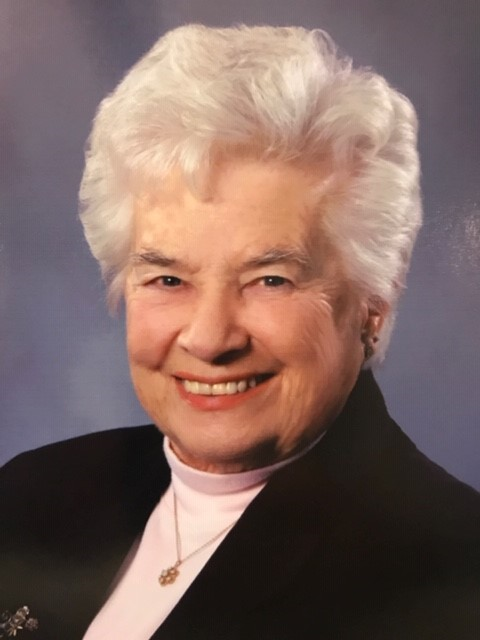 Davies Bahr passed away peacefully on October 3, 2019 in Boalsburg, Pa.

Born Davies Emily Uhler on March 8, 1926, she grew up in Philadelphia, Pa. She studied Physical Education at Temple University where she met and married Walter Bahr in 1946. Davies and Walt raised a daughter, Davies Ann, and three sons, Matthew, Chris, and Casey.

Davies worked in the Philadelphia school system for over 20 years, first at West Philadelphia High School and then, Northeast Philadelphia High School. In 1974 the family moved to Penn State University where she immersed herself in Penn State life. Shortly after being added to the PSU faculty she was put in charge of the White Building and was subsequently tapped by the University to help establish and organize the first Keystone Games, earning praise from the Governor for her leadership and organizational skills. For the next 45 years she supported all PSU athletics. She was an avid tailgater at PSU football games, making sure she was in the stands in time to see the band perform in the pre-game ceremonies. She never missed their half time performance.

Most of all she supported her family. She could be seen in the stands for practically every home event her husband coached, or children or grandchildren participated in. Be it soccer, football, gymnastics, or theater productions, she provided a lifetime of support.

After her retirement from PSU in 1989, Davies remained active in the Happy Valley community serving on the Boalsburg Planning Commission and volunteering for a myriad of local charitable committees and events. She was a volunteer in the Mount Nittany Hospital emergency room for more than 25 years and was a fixture at their charity golfing events.

Davies was preceded in death by her husband, Walter Bahr, on June 18, 2018. She is survived by four children, eight grandchildren and one great-grandchild.

Memorial service will be at 11 a.m., on Friday, October 25, 2019 at St. Andrew’s Episcopal Church, 208 West Foster Avenue, State College, with the Reverend Jeffrey A. Packard officiating.

Inurnment will be in St. Andrew's Episcopal Church Columbarium.

In lieu of flowers the family requests memorial donations be made to the Mount Nittany Health Foundation, 1800 East Park Avenue, State College, PA 16803.

Share Your Memory of
Davies
Upload Your Memory View All Memories
Be the first to upload a memory!
Share A Memory
Send Flowers