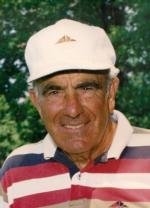 Roland L. Hess, 90, of Bellefonte, died Wednesday, December 29, 2010, at Centre Crest Nursing Home. Born July 8, 1920, in Conyngham, he was the son of the late Harry Hess and Hazel (Lutz) Hess Lawder, On June 27, 1943 he married Carmelia (Friendy) Hess, who survives. He is survived by four children, Ron Hess, of York; Michael Hess, of Chadsford; Lisa Mazzocchi and her husband, Ray, of State College; Karen Grohol and her husband, Tom, of Elizabethtown; twelve grandchildren and three great grandchildren. Roland served in the United States Coast Guard. Throughout his life he pursued many professions, but none more passionately than as a professional golfer. He was most recently employed by the Valley Country Club in Conyngham, PA. He was still working part time until the age of 88. He was a member of St. John Bosco Church in Conyngham. He was also a lifetime member of the Professional Golfers Association. A Memorial Service will be held at a future date at St. John Bosco Church in Conyngham. Burial will be in Calvary Cemetery, Drums, PA. Memorial contributions may be made to the Alzheimers Association at 3544 N. Progress Ave. #205, Harrisburg, PA 17110.
To send flowers to the family or plant a tree in memory of Ronald Hess, please visit Tribute Store
Services for Ronald Hess
There are no events scheduled. You can still show your support by sending flowers directly to the family, or planting a memorial tree in memory of Ronald Hess.
Visit the Tribute Store
Print
Share A Memory
Send Flowers