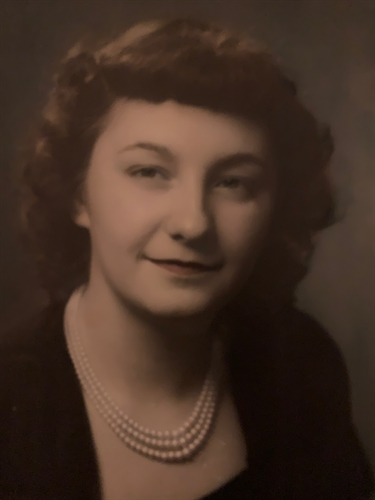 Gladys Carlson, 90, of State College passed away at home on November 19th after a courageous battle with cancer surrounded by her family. Born December 23, 1928 in Johnstown PA to George and Mary Hamara. Gladys was preceded in death by her husband, Thomas Carlson, who she married in 1949. Gladys was also preceded in death by 9 brothers and sisters. Gladys is survived by her two sons, Jerry Carlson and his wife, Sara, of State College and Randy Carlson and his wife, Cathy, of Boalsburg. Gladys is also survived by grandchildren, Jennifer Castro of Mechanicsburg, PA, Erin Loy and her husband, Justin, of State College, Amy Blake and her husband, Michael, of State College and Kenny Carlson and his wife, Molly, of Lincoln, Nebraska. Gladys is also survived by her 5 great grandchildren, Marissa, Riley, Ryan, Evan, and Brooke; and many nieces and nephews who all loved her dearly. Visitation will be at Koch Funeral Home in State College on November, 25th from 10-11 am and followed by a service in the Koch Funeral Home Chapel at 11 am officiated by Rev. Carolyn Hetrick of Grace Lutheran Church in State College. Burial will be at Ft Indiantown Gap National Cemetery. In lieu of flowers, contributions in Gladys's name may be made to the Wreaths Across America: https://donate.wreathsacrossamerica.org Arrangements are under the care of Koch Funeral Home, State College. Online condolences and signing of the guest book may be entered at www.kochfuneralhome.com and visit us on Facebook.
Monday
25
November

Share Your Memory of
Gladys
Upload Your Memory View All Memories
Be the first to upload a memory!
Share A Memory
Send Flowers